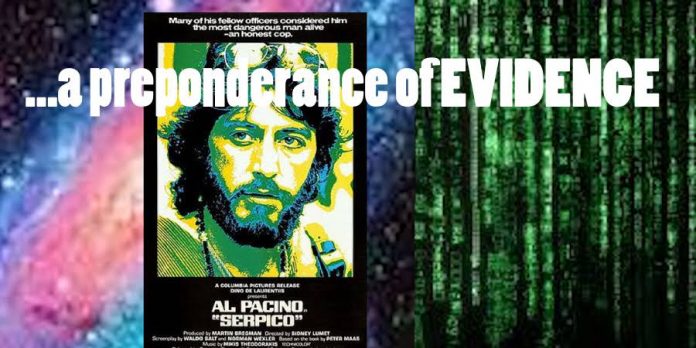 I recently watched the MUFON panel discussion on video and the speakers were:  Rich Dolan, William Tompkins, Corey Goode, Andy Basiago,  and Michael Salla.  I was dismayed to see that few on the panel were able to deal in a clear concise way with what is considered EVIDENCE.  Most concerning was the Mufon Director who near the end in essence said that he had seen “no evidence presented” at that conference and yet he, at Mufon has a preponderance of such.

Here is a dictionary definition of the word EVIDENCE which includes the legal definition:

2. something that makes plain or clear; an indication or sign: His flushed look was visible evidence of his fever.

3. Law. data presented to a court or jury in proof of the facts in issue and which may include the testimony of  witnesses, records, documents, or objects.

Just to focus the mind, EVIDENCE in a courtroom that is, testimony from witnesses is often what sends murderers to jail for example.

To his credit, Andy Basiago, seemed, as a lawyer to have the best grasp on this concept.  It was nice to see him maintain his cool demeanor in the face of the adversarial nature of Dolan’s attacks.

It is worth noting that a lack of the ability to reason out or make sense of both witness testimony and documents as well as photographic and video EVIDENCE is precisely the problem here.  Let’s set a few clear ground rules so we can all be on the same page:

1.  The question of evidence presented at the MUFON conference and discussed at various times on the panel (for example, Michael Salla’s FOIA documents supporting the testimony of William Tompkins), along with other testimony indicates that the MUFON Director was sadly confused and misled as to what constitutes evidence.

2.  That a discussion of whether a certain DOCUMENT, PHOTOGRAPH, VIDEO OR TESTIMONY is true or not or faked is not at issue here because it would depend on each case.

3.  Would someone please tell me why documents created BY HUMANS are any more reliable than HUMANS THEMSELVES?  Because one look at the OBAMA BIRTH CERTIFICATE, or MAJESTIC DOCUMENTS will tell you that great investigations and time consuming analysis can go on for years sometimes to determine the authentication of these things.  Another case in point being the famous KENNEDY ASSASSINATION Zapruder film.

So evidence even documents and photos, film and video etc can be altered or faked.

Anyone who has heard of SHEEPDIPPING by the CIA and other clandestine intelligence services will know that changing and altering as well as disappearing or destroying documents, films, records and entire backgrounds of agents can be done and is done on a regular basis.  The purpose can be to hide the identity or purposely discredit an operative in order to either protect the operative or the agency.  There is also the instance of the Burn Notice (see the TV show named after this, and the role of what are called NOCs, in essence, agents that are unacknowledged by the agencies and governments they work for or ‘burned’ so they no longer have access to their line of command.  Unwanted Publicity Guy, Paul Collins, is such a person.  He writes a column on this website.

This also happened to former astronaut, now deceased, Brian O’Leary.  Watch the Camelot interview with Brian O’Leary to hear more about how CALTECH tried to deny he ever taught there and how a San Diego newspaper reporter was fired for attempting to write an article about Brian.  Brian died of a suspiciously rapid form of cancer not long after he appeared (and testified) via skype video on our pilot for TruTV :  SHADOW OPERATIONS.

Gordon Novel, also recently deceased admitted to me late one night while on the film shoot of our pilot SHADOW OPERATIONS that he worked for the CIA when he contacted me to arrange for a call between CIA and our producer when they tried to take control of the show. He denied being CIA for most of his career. He told me that his emails were being faked by the CIA and sent to his contacts as if they came from him resulting in ruined friendships in some cases. He said this was done on a regular basis by them. And this was long before the SNOWDEN disclosures. Go here to WATCH MY INTERVIEW WITH GORDON NOVEL.

So what does this mean?  It means that witnesses can be discredited in a multitude of ways.  Just like documents.  If you read the excellent book OPJB by Christopher Creighton a secret intelligence officer during WWII for the British Government (who also inspired some of the Ian Fleming James Bond stories), you will hear about how records that is, OFFICIAL DOCUMENTS, were regularly altered, faked and replaced by MI5 and MI6.

With this in mind, it is critically important that WITNESS TESTIMONY and WHISTLEBLOWER TESTIMONY be taken for what it is and treated by researchers in the secret space program with just as much weight and regard as well as sober analysis for degree of truth or falsity as DOCUMENTATION.  (Also see my prior article on this subject :  DEFENDING WHISTLEBLOWERS).

There is good “evidence” that Mufon has been infiltrated by the CIA and so maybe the Mufon Director who spoke up on the above mentioned video was possibly not as dumb as he sounded.  He may have simply been ‘doing his job’ to discredit and disinfo the proceedings of his own conference.  He may have been ‘under orders’ to try to discard the entire panel of researchers and witnesses by making such a false statement.  Also see the Camelot interview with Bob Fiske for testimony on the infiltration of MUFON.

A note of altering of timelines, documents, records of all kinds and human memory:

It is also worth noting that among various alien tech obtained by the secret space program/ secret government there is evidence that they are able to shift timelines, go forward or back in time and alter long distance documents and other records such as film etc by some means which may include scaler weapons, particle beam weapons, time shifting technologies and perhaps even mass mind control which could account for documented cases of what is called the Mandela Effect.  Many people can testify to this and some documents, films and other evidence reflects these apparent changes in timelines.  Also see the Dan Burisch interview STARGATE SECRETS  Parts One and Two where he talks about the Looking Glass Technology for more on this subject.

With that in mind there is yet another controversial concept to be considered and that is that we are moving from 3D into 4D and as a result the veil is thinning (as they say) and something you think often manifests in record time.  This will eventually be proven as 3D printers become more sophisticated.  As we become more refined and rise in vibration or frequency our reality will become much more malleable and fluid. Many people will witness this on a subjective level and eventually there will be more ‘material evidence’ of this as well.

Being limited by a materialistic view of what we call consensus REALITY is being locked in the Matrix.  For those on the panel who find themselves having trouble dealing with the unseen aspects of reality I suggest spending more time in meditation and working on raising kundalini energy to see more ‘evidence’ in their own lives of how truth can be stranger than fiction.  The UFO/ET question can only be investigated using more than the traditional 5 senses.  This much is clear.  If you have beings and craft that with ease go interdimensional it’s time to widen the mind and develop more of the human senses than the traditional matrix-locked are willing to acknowledge. Perhaps a study of Remote Viewing —a program well documented will help with this process.  I especially recommend the work and writings of INGO SWANN considered one of the best psychics and by some as the father of remote viewing.  He talks at length about human superpowers.  He has sadly passed on but if his website is still intact it used to be called biomindsuperpowers.com.  The new site is here:

In the end as Einstein said, “The true sign of intelligence is not knowledge but imagination.”