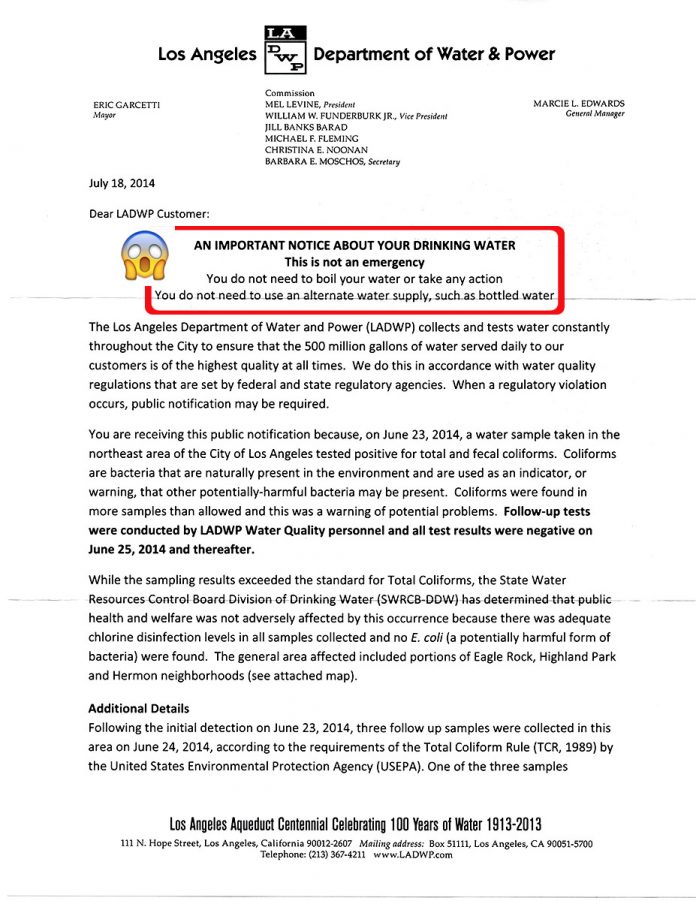 Recently the following notice was sent to people who are in the LA water district.  (note I do not live in that area)…

Bottomline:  they were told that contamination was found in a sample on June 23rd… And then the tests the following days did not show any contamination.  See the public notice one person received below.

Even one positive reading would seem to indicate that Houston we have a problem… it seems to me however, then they go so far as to tell people not to drink bottled water and there is “no need to boil” their water!

For the record, while I do not live in the LA area, with all the indications of unsafe water in cities around the U.S. I regularly distill then ozonate my water… and mineralize it.

The person who sent this to me writes…

…”I wanted to contact you about an important notice I’ve received today about LA drinking water from the department of Water & power (LADWP). I thought this would interest you.

It certainly devastated me. It exactly say’s

” AN IMPORTANT NOTICE ABOUT YOUR DRINKING WATER. This is not an emergency.

you do not need to use an alternative water supply, such as bottled water.”

…….we do this in accordance with water quality regulations that are set by federal and state regulatory agencies. When a regulatory violation occurs, public notification may be required.

I’ve scanned and attached the copy of it for you to see and publish it if you like to.

I’ve been living in LA, CA for 14 years now and I’ve never ever received this kind of a notice from LADWP before. Have you? If you read the whole notice letter, you’ll notice that of course they don’t mention about Fluoride and other chemicals are in our LA water at all.”

Anyone who trusts tap water around the U.S. needs to seriously re-examine their thinking.  This is a great tragedy as there is nothing more important than water for health and well being.