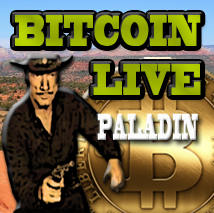 The first stone has been cast…..

Update:  Article about Bitcoin “issue” being worked out….

If there was ever any doubt about the legitimacy of bitcoins, it should now be put to rest.  On Monday, news reports of the arrest on Sunday of a bitcoin promoter for money laundering and operating an unlicensed money transmission business (I’m going to have to look this one up) were released by the controlled propaganda arm of the cabal, mainstream media.  This is the first shot fired in the war on bitcoin and a saber rattling warning to others who may have the inclination to challenge the fiat money system, aka the Federal Reserve and the European bloodlines.

Bitcoin was launched in 2009 and has finally gained enough traction that DC held meetings last fall on what to do about it. It seems the conclusion was that they couldn’t regulate it and couldn’t declare it illegal under existing law so they virtually issued a “no comment”.  However, soon after those meetings, former Fed Chairman Greenspan was interviewed and gave his opinion of the emerging currency.  Needless to say, when they dust off an old relic and trot him out in front of the microphones for a statement, you know they’re taking it seriously.

My background is finance/accounting so I’ve been following bitcoin for about a year, having had many discussions with colleagues on the merits, ramifications and integrity of the process.  I have been convinced since the beginning that bitcoin was not a cabal test to see if the public would accept a cashless society, or a cabal lead in to the cashless society or another surreptitious attempt to usurp more of our hard earned dollars.  It was not that I didn’t think the cabal capable of these tricks as I’m fully aware of their nefarious methods throughout our short history of stealing all the wealth they can from us while we’re alive. It’s because bitcoin is the exact opposite of our current monetary system in all respects.

Kerry and I have been discussing the merits of bitcoin for quite a few months and we hope tonight’s livestream on the subject will not only be entertaining but also informative.

We will also be discussing the recent Terror Bowl letter that has been circulating around the internet for the last few days regarding a possible false flag event.  There are some interesting nuances with this that again, Kerry and I have discussed in the past and the synchronicity of this letter demands that we disccus them.

JOIN US!  TONIGHT …Wednesday, Jan 29th, 7pm EST / 4pm PST — On the Camelot Livestream Channel I will be talking with Paladin from the White Hats (currently a columnist here on the Camelot site), all about BITCOIN.  Why it differs from fiat currency and the efforts of the PTB to stop it from replacing our monetary system.  Paladin is uniquely qualified to weigh in on this topic as a forensic financial investigator with a background in corporate and government agency contracts.  As a member of the website responsible for the investigation and publishing of a number of reports following the money into black projects and down the rabbit hole (tdarkcabal.blogspot.com/ ) his views of this current challenge to the corrupt monetary system should be fascinating and enlightening to those who will take the time to listen.