For the first time in history the Trading Programs are revealed with documentation, how the secret gov / secret space / Deep State is funded!  This group is putting their lives on the line to get this info to the public!

…”The Storm is here.

The releases coming over the next few weeks will expose the details of the methods by which the cabal rules the world through the control of money by showing you trading contracts with proceeds as high as $3 Trillion and $25,000 Trillion. Enough to fund every TRUE humanitarian project on Earth in addition to advanced technology, free energy, the exploration of our universe, housing, hydroelectric projects for undeveloped countries, turning deserts green and other infrastructure projects all over the world. Instead, the money is used to subvert the production of the people to a select few bloodline families. This is how these people control Planet Earth.

Signatories to the trading contracts:

Trading programs were created as a way to raise funds for projects that relate to humanitarian endeavors, ie. Creating, maintaining and rebuilding infrastructure, assistance with bringing undeveloped countries up to current technologies, rebuilding communities after natural disasters….are just a few of the applications.

But, as with anything to do with the financial world, the rat pack of bankster cabaliss have infested it at the highest levels to subvert the program for their own devious plans to control the world. History is replete with personalities whose aspirations to run the world are well known: Alexander the Great, Genghis Khan, Julius Caesar, Adolph Hitler….are just a few who come to mind. Why is it such a stretch to believe that that same lust for power is not present today? Rather than be accomplished by might and power and strength and armies all out in the open, now it’s being done in secret by conning the people of the world utilizing a usury system of currency control akin to immoral grifters running a game of three card monty.

whitehatsreport.com/2018/01/24/1400/
whitehatsreport.com/
Added notes:
Also see my interview leading up to the release with PALADIN THE WHITE HAT :  youtu.be/6vIpKyEbU0k
Follow up interview is scheduled for Thursday February 1st at 7pm PT.
Getting the truth out one whistleblower at a time!
Kerry Lynn Cassidy
Founder / CEO
Project Camelot
projectcamelot.tv
STAY UP TO DATE SUBSCRIBE TO:
MY YOUTUBE CHANNEL
youtube.com/jagbodhi/
TWITTER
twitter.com/projectcamelot
AND FACEBOOK
www.facebook.com/kerrylynncassidy 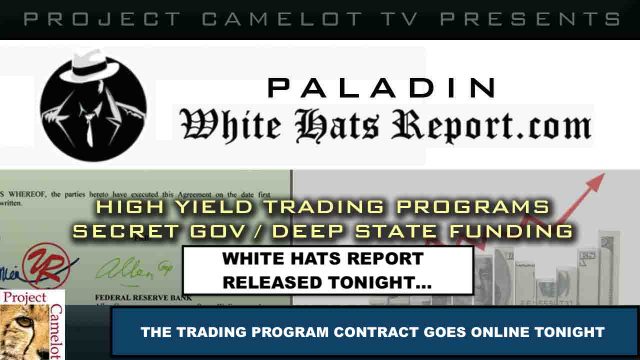 WATCH THE  INTERVIEW THAT LEADS UP TO THE RELEASE OF THE EVIDENCE:   KERRY talks with PALADIN about the White Hat Reports investigations into high yield trading programs, crypto currency, following the money down the rabbit hole of how the secret space/ secret gov is funded. GO TO : whitehatsreport.com/ FOR MORE INFO.