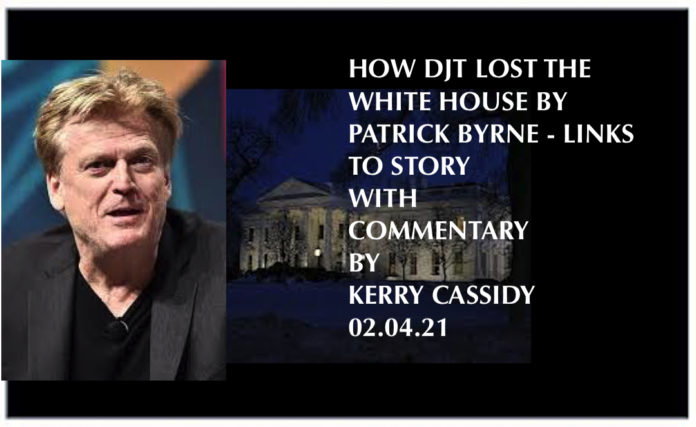 THE FOLLOWING ARE LINKS TO THE DEEP CAPTURE ARTICLES WRITTEN BY PATRICK BYRNE along with my commentary on each chapter.

..”I am going to refrain from saying too much about mine and Sidney Powell’s relationship. For one thing, over time it became something like I was working for her, helping her get answers to questions. Then, if I recall correctly, she became my lawyer. Whichever it was, in time the relationship became something for which…”-Patrick Byrne

EXCERPT FROM THE ABOVE ARTICLE:  .”…At one point I learned how the President was staying involved. Periodically, the Mediocrity and Rudy Giuliani were going over to the White House to brief him. Really, no kidding: the person who was so bad my colleagues had declared they would quit rather than work another moment with that person, and the 76 year old guy who had trouble sending an email and was spending at least his evenings sloshed, were the ones explaining to the President the cyber-crime of all time and what his options were. At first I thought it was a sick joke, but I confirmed it.  The Mayor and the Mediocrity were the ultimate point-people on the mission of addressing this world-historic event.”– ARTICLE BY PATRICK BYRNE, How DJT Lost the White House, Chapter 1: All the President’s Teams (11/3 – 12/17)

Kerry:   ONLY ONE CONCLUSION CAN BE GATHERED FROM THE PATRICK BYRNE SAGA OF THE GIULIANI LED EFFORT TO TAKE THE PROOF OF VOTER FRAUD TO THE COURTS…IT WAS ENGINEERED TO FAIL …. ON PURPOSE WITH INTENT.  Either because they KNEW from the get-go that the Courts were corrupt (they are) and that they had NO SHOT at getting a fair hearing in ANY STATE… but they needed to MAKE AN EFFORT to appear as though they wanted to use that decrepit legal system “as if’ it might work as a distracting dog and pony show for the public or they wanted to expose for those around him… to reveal Giuliani’s ineptitude and perhaps treasonous negligence and possibly others… or both …  BUT IT WAS DOOMED TO FAIL. …Which I happened to know from the beginning.

How DJT Lost the White House, Chapter 2: Was there Foreign Interference in this Election? You Make the Call. by Patrick Byrne

“The occasion was a 1950’s drunken Hollywood party. The leading men of the day were holding a contest of a certain form, impromptu. Jackie Gleason famously shouted out a request to Milton Berle: “Hey Miltie, do us all a favor, and only pull out enough to win!” In this chapter I will follow that principle.…”-Patrick Byrne

Kerry:  In this Chapter Patrick Byrne shows the copious evidence that establishes beyond doubt that there was election fraud with respect to Dominion Servers 43% coming from China.  IN other words they have the evidence that more than proves the fraud.  At least at this point in the saga, even before the election it was clear there would be fraud.  In fact if these machines had been used in the past there is further proof there has been fraud in U.S. elections going back many years.  So the Trump team KNEW and the setup was complete.  The players were in place to STEAL THE ELECTION before it happened.

“On the evening of Friday, December 18, Sidney Powell, Mike Flynn, a sharp female attorney on Sidney’s team (whom I will call “Alyssa”), and myself decided to call an SUV and get driven to the entrance that serves the Eisenhower Executive Office Building, which is on the grounds of (and connects to) the White House. …”-Patrick Byrne

Kerry:   Re Chapter 3:   Lovely depiction of President Trump in Chapter 3 but stunning to see how misled he appeared to be.  And nice to see his decisiveness.  What happened after that crucial meeting to change his decision to have Sidney Powell and Mike Flynn run the election fraud investigation?  One wonders what strange ties exist between Trump and Giuliani where his incompetence would not be known or would he be used to act drunk and disorderly in order to play along with the farce knowing he was part of a vast scheme.

“I stayed around in DC for the next several days. Flynn and Sidney left to their own worlds for a few days, but before Mike left we had a conversation. I will use this opportunity to share a bit about Mike Flynn. I knew from people who had worked in the field what Flynn had…”-Patrick Byrne

Kerry:  Chapter 4:  Sad, pathetic and shocking… It becomes clear that any “evidence” of a stolen election is no longer a priority for the Trump Team.  Why not?  Some sea change perhaps in tactics.  Byrne and General Flynn were clearly left OUT OF THE LOOP.  Again, why.

What this all points to is the fact that the ELECTION FRAUD ISSUE was NOT BEING PURSUED WITH ANY SERIOUSNESS BY THE TRUMP TEAM.  Interesting that Trump bothered to take meetings from Powell, Flynn and Byrne regardless… perhaps simply to continue the charade.  The EVIDENCE of Fraud was clearly NOT PART OF THEIR “PLAN”.

I should say, pursuing evidence of fraud was not part of their plan (except for the public’s benefit) which is why they put Giuliani at the helm.  They knew of his incompetence (or perhaps Giuliani was playing a role as well).  All of this to display for the American people the fraud and treachery on all levels including in the courts.  Which means, Flynn, Byrne and Powell were all left in the dark, actors in this exposure charade… like so many others. (One would think either Flynn was acting or he was brought in late to the insider circle around Trump).

ADDED NOTE:  see what I wrote at the top of my comments on the Byrne 4-part article (chapters)… it all comes back to what the Trump team knows and then when and where they reveal to the public… And what they keep secret.  This has been their MO all along.  What they do to stoke the fire and prove injustice, deep state treason and so on… And what they actually consider crucial to their drive to take back the Republic and win the war.

AN INTRODUCTION WITH SOME BACKGROUND BY PATRICK BYRNE:

How DJT Lost the White House, Introduction: Why I Was Involved Before November 3 & What I Learned Because I Was (1.3)

A concerned citizen who has been hunting the oligarchy and Deep State since 2004.