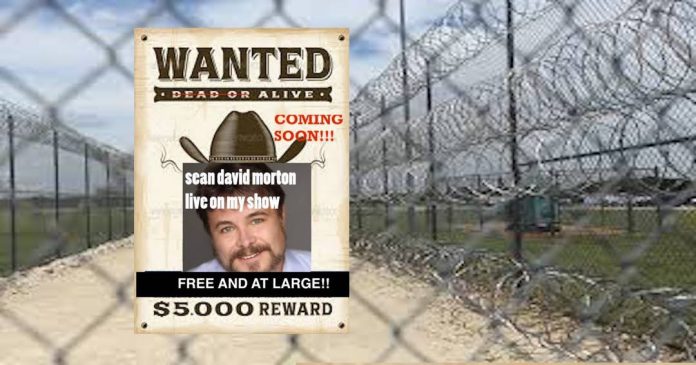 SPECIAL NOTE:  When Sean gets released he will need a place to stay to get back on his feet (preferably in California near the coast) …. contact    SeanMorton108@gmail.com if you have a place for him…Thanks very much.

Dear _______,
I was on ABC LATE NIGHT talking about how JFK jr. was murdered by HILLARY CLINTON and I was of course mocked for it…
1. JFK jr. was planning on running for the NY SENATE SEAT using his own $$$ and his magazine GEORGE.
2. He desrcibed HRC as “an unscrupulous carpetbagger”
3. Jackie O. always warned her son “Please do not enter PUBLIC LIFE, or you will end up like your father and uncle Bobby.
4. The DAY JFK jr DIED he had LUNCH with HRC, told her of his plan and bascially told her to “GET OUT OF DODGE! THIS TOWN AIN’T BIG ENOUGH FOR BOTH OF US.”
5. JFK jr. Left the lunch WHITE FACED and TERRIFIED…NO COMMENT TO THE PRESS.
6. HRC left and reporters asked WHAT DID YOU TALK ABOUT? HRC said, “I advised him NOT to enter PUBLIC LIFE!” QUOTING as a DEATH THREAT the words his mother used.
7. The last words JFK jr. uttered were, “RUNWAY AND TOWER IN SIGHT….ON APPROACH!” The last 10 min. of the tower recordings were confiscated and classified by the FAA…
8. BILL CLINTON TOOK OVER THE SEARCH for JFK jr.
9. CLinton, for the first time EVER in a search and rescue OP. cordoned OFF a 25 mile area making it OFF LIMITS to ANY civilian efforts….
10. CIvilians on the beach claimed to have SEEN a helicopter CHASING and FIRING ON a small aircraft, but MILES AWAY from where the search was happening….
11. When the “PLANE” was found at dusk….photos showed it was RED and JFKs plane was WHITE with a red stripe….
12. Plane was pulled up…at dusk, bodies were transferred to the USS GRASP, where they were cremated and ashes dumped over the side joined by the Kennedy family, who just so happened to ALL be out on their YACHT….
13, JFK jr. IN HIS WILL wanted to be buried next to his father, and arrangements had been made to do so at ARLINGTON even though he never served in Govt. or military…
14. Years later an MI-6 AGENT who was a friend, told me that TWO DEATH, Jfk Jr. and Diana, came up in his data base classified as “PROJECT: GAIA” which was the BRITISH version of the “JAMES BOND WITNESS PROTECTION PROGRAM”. And I asked if they could BOTH really be alive….??? He said, “Just sayin’ mate!”
So THIS coming out NOW confirms all I have said YEARS AGO….once again….
If you could post this to Kerry Cassidy and AlternativeRealityDisorder.com from me…that would be great!
your pal
Sean Morton