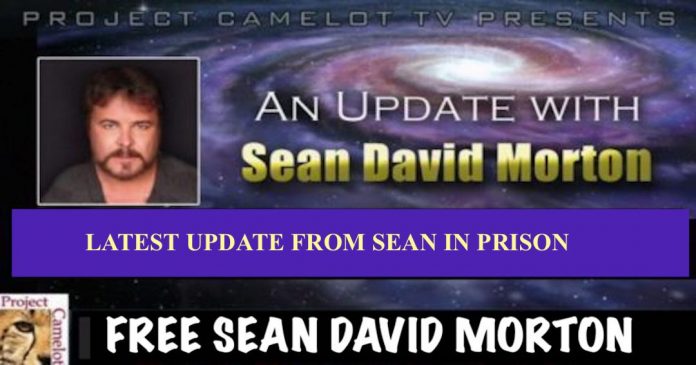 From Sean: Greetings and Hallucinations to ALL! They finally let us out to use the computers for a day in this never ending lock down, which is all just their greed, saving money, and that they can’t get any actual PERSONNEL to man this horrible place in the Federal Gulag Archipelago!! Updates: My appeal, stunningly, was denied! Which seems unbelievable since I was denied DISCOVERY, REFUSED a statement of exactly WHAT the jurisdiction of the court WAS, denied an attorney for the sentencing phase of my trial, and was convicted of a KLEIN CONSPIRACY, which means that I single handedly shut down the ALL of the working functions of the IRS and US FED GOV….by writing them LETTERS!! YUP! Just because I actually RESPONDED To all the utter crap they were sending me, and asked them QUESTIONS, which I had every 1st Am. RIGHT to do…. lil ol ME shutdown the whole Gubberment!! sigh…. My medical condition is getting far worse and has now gone untreated for 8 months!! Their non-stop misdiagnoses, even though I kept telling these morons WHAT IT WAS, resulted in them ripping out 4 of my teeth…and now the cancer is metastasizing in my larynx, vocal cords and esophagus…..so it is getting harder and harder to talk, swallow, chew, move my head, oh…. and breathe! The doctor, Raymond Winger, sued twice on the outside for malpractice, saw me last week and screamed, “I KNOW WHAT I AM DOING!”and I said, “Despite all evidence to the contrary!”….then he gave me ANTI-BIOTICS…for CANCER!! When I looked up what they were actually FOR I discovered they were for a URINARY TRACT INFECTION!!! For my….NECK!! Meanwhile my motion for release has been sitting in front of Judge Wilson and the court since July 1. So just hanging fire until something happens. The real question is what happens first? The COURT finally ruling to let me go…or not….OR….me dying in here! Wish me luck. Post everywhere. Tell all your friends! Infinite Blessings Dr. Sean-David Morton
Second Message from Sean: Dear Everybody… They let us out of lockdown so rarely to use the computers for email, that I just always want to take the opportunity to update y’all. How are things out THERE??? See what happens when you allow the EVIL ONES in power to lock up your prophets and teachers!? WOE UNTO ISRAEL!! So saith the LORD GOD KING OF HOSTS! The fires in So Cal in Riverside Co. bye the bye are right atop the SAN ANDREAS FAULT…and the Big Bear Caldera is quaking and acting very hinky, and no one is paying attention due to the lock down and the RIOTS, WHERE they are burning Bibles now, showing their true colors!! Can ANYONE in their actual RIGHT MIND be considering voting for this lunatic boob Joe Biden? I mean…really? IF Biden is elected with his Communist brain trust of A.O.C. and Warren and Sanders and Bozo O’Rourke, you will see a REAL REVOLUTION!! Of ALL really PISSED OFF PEOPLE Of ALL COLORS…with GUNS AND REAL WEAPONS…mark my words!! Okay…I, incredibly, lost my appeal. The 9th Circ. Court has really officially lost its mind….but, the people doing my legal work have, once again, just DISAPPEARED into the trees to hunt for bananas or something. So I really desperately need legal help which does not seem to be forthcoming, leaving me, once again, all alone….naturally…(thx Gilbert O’Sullivan!) So… 1. I need a CONSTITUTIONAL HABEAS CORPUS on my case. 2. Writs of MANDAMUS and CERTIORARI to the SCOTUS…if that will help. 3. A DEMAND that my case be heard by the ENTIRE 9th Circuit Court…all 29 justices, as at least 17 of them are not totally deluded and maniacal. 4. For Judge Wilson to finally get off his black robed arse and rule on my release, as my cancer is spreading and getting worse, which is what cancer DOES…they will NOT and CANNOT treat me here, and I cannot be transferred anywhere I CAN be treated due to the COVID PANDEMIC. I have spent 3 years now in the federal gulag for having a CPA do my taxes, my getting a LEGAL AND LAWFUL RETURN, and then trying to HELP PEOPLE that were being crushed by the banks and the criminal debt system. So, as I have said, this is now a race against time, as to whether I will be released for treatment of my disease, or kept here to die at the hands of the BOP. INFINITE BLESSINGS and Love! Dr. Sean-David Morton Please post far and wide….