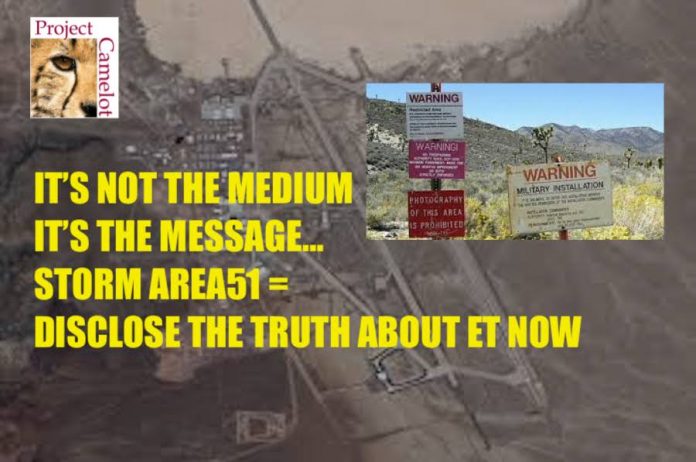 “Facebook user Jackson Barnes wrote on the event page: “Hello US government, this is a joke, and I do not actually intend to go ahead with this plan”.” — from BBC Article linked below.

It does not matter that ‘storming Area 51 is a dumb idea’ what matters is that the people are waking up and demanding the end of secrecy over the ET question!  Take heart from this!  We have reached critical mass and the people are demanding disclosure now….

TO THE STORM AREA 51 GROUP: Hi all, I think its a fun idea but it could end up as a blood bath or at the least a lot of arrests! How about if we take all this great energy and create a huge conference at LITTLE ALI-INN RIGHT NEAR THERE? That way people would have a constructive informative place to vent their feelings and create an atmosphere for learning?? I am suggesting to my colleagues who would be willing to help set this up and any fundraisers who might want to help. It’s a military facility and you can’t get in underground anyway!! contact me on Facebook or email kerry@projectcamelot.tv if you are interested in channeling this energy in a constructive way… THE SAME MESSAGE WOULD BE SENT… DISCLOSURE NOW…without the strife.

I posted this on their STORM AREA 51 page and mine: