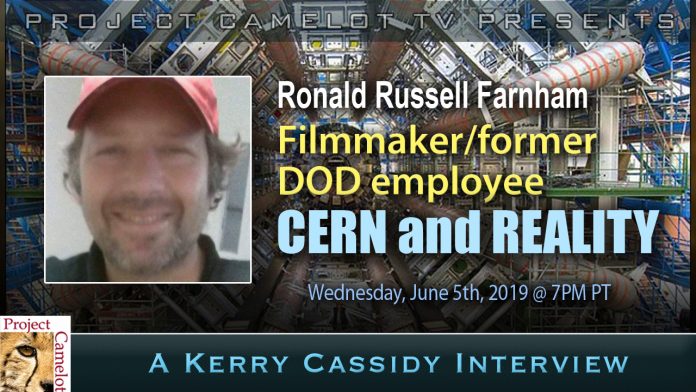 Ronald Russell Farnham, former DOD employee, now author and filmmaker re CERN and Reality.
www.youtube.com/watch?v=42l_3feiv1c
Ronald’s facebook page:   www.facebook.com/ronald.farnham
SHORT BIO:  Ronald Russell Farnham is an author and filmmaker who held a top-secret clearance for 15 years. He resigned in August 2006 while working as the Pathfinder Trainer at Headquarters Special Operations Command because the NSA refused to implement his solution to end terrorist activity across Earth.
At the time he resigned he was also the commercial spokesperson for Luzianne Iced Tea and a few other commercial products. Ronald went on to write what he calls the Sequel to the Bible. A book that he features in his movie that is currently streaming on Amazon Prime. That movie is Hollywood and Vine that he wrote, produced, directed, and financed in Los Angeles where he spent nearly a year on skid row in order to complete the filming of the movie. He has since published more books and has released more movies, each with its main purpose being to spread his solution to End War and Poverty and for each of us to be recognized as living souls. Ronald is currently in Florida shooting three feature films and a reality show. His film HOLLYWOOD & VINE recently screened in CANNES.  In his spare time, he plays and umpires baseball, lifts weights and walks his mother’s dog, Happy..
Links:
BOOKS/DVD ON AMAZON:
www.amazon.com/How-Write-Screenplay-Days-Less/dp/1463440324
www.amazon.com/Rononymous-Ronald-Russell-Farnham/dp/B01J4E22GC/ref=mp_s_a_1_1?keywords=rononymous&qid=1559668319&s=gateway&sprefix=ronony&sr=8-1
www.youtube.com/user/TheRonaldShow2011
FOR MORE INFO:
ENLIGHTENMENT THRU ENTERTAINMENT PROD.

MOTION PICTURES
HOLLYWOOD AND VINE on AMAZON PRIME US & UK
MUSIC VIDEO – Love At First Sight
DOCUMENTARY – True Stories, The UFO Abduction of Rob Amos
FEATURE LENGTH MOTION PICTURE – Hollywood and Vine
DOCUMENTARY – RONONYMOUS
REALITY SHOW: The Ronald Show
The Art of Roasting and Carving a turkey for Adults and Kids
BOOKS
Hollywood and Vine
THE SECOND COMING OF THE MESSIAH
How to Write a Screenplay in 30 Days or Less