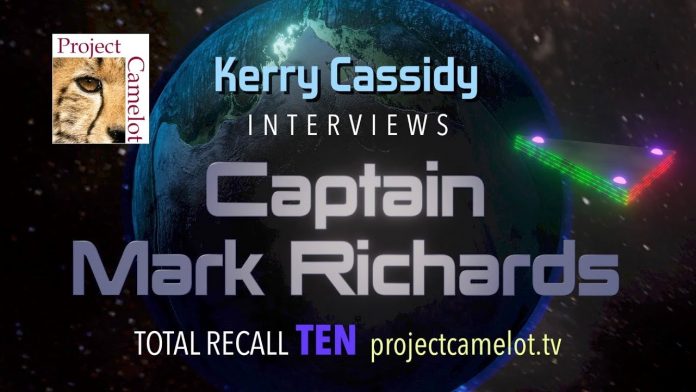 Hi Rick and all,

projectcamelotportal.com/2019/03/01/mark-richards-captain-secret-space-program-all-9-interviews/
The nine plus 10th interview with Mark Richards are very coherent and have a through line that does not deviate.  It is too long to go into here.  If you do your homework you will see interview 10 is part of the previous 9.  Mark Richards is also a PROLIFIC WRITER so judge him by his writings!  They are available here:
edhca.org/products/
It is also worthwhile to understand the man.  And his wife, Jo Ann Richards, an accountant by trade.  And a lovely soul.  I have also interviewed her!
projectcamelotportal.com/video/jo-ann-richards-space-command-re-mark-richards/
And here
projectcamelotportal.com/2012/06/08/jo-ann-richards-re-mark-richards-space-command-2/
More evidence
projectcamelotportal.com/2018/10/27/kevin-moore-attack-on-captain-mark-richards-who-benefits-2/
It’s very strange to be around so many people who do not have the intuitive/psychic ability to discern the truth.  You can present the truth in clear and concise terms but they can’t hear it, can’t see it.
What can I tell you.  If you are so naive as to believe that Lear is not MJ12 when he so clearly is… and if you do not know their mixed agenda (explained multiple times over the years in Camelot) then I don’t think I can help you.
Everything is available on my site for free.  I have done thousands of interviews with people from all walks of life.
I have whistleblowers and sources from above top secret.  Some are now well known.  Others are more secret and never come out in public.
The truth truly is out there.
It’s not my job to convince you or anyone else.  We present the evidence and provide the interviews so you can see the witnesses speak for hours at a time under my high scrutiny and questions.  You decide.
If it resonates so be it.  If not, then no amount of truth telling will open your eyes.  If you wish to believe that Jo Ann and I are deluded.  That Mark who has written books and treatises available for a very low cost is not to be believed.  If you wish to remain in your cocoon of unknowingness do so.
Otherwise, take a look at the information I have provided.  With over 700 video interviews.  5 years of radio shows (audio files) and written reports as well as writings from Mark Richards I think you can make a qualified assessment.  What I find is most people neither have the time or inclination to investigate and listen to the truth.  Instead they prefer to reach a short sighted opinion based on their own sense of trauma, religious programming, big Pharma induced psychosis and ego centered blindness.
William Tompkins was paid thousands of dollars to talk to Gaim tv for months on end.  I spent 3 hours with him.  All available for free on my youtube channel.  At the end of the interview he told me he loved me.  Off the record he acknowledged we came from the same Pleiadian root race.  The second time I went to interview we were scheduled for a month.  When the night before the interview came I got a message.  He called to say he would never speak to me again and not to call.  And a month or two later he was dead…or was he.  Is he off Planet on Mars or somewhere else.  I like to think so.
Do you think it is an accident that my connection with him produced such an amazing amount of info.  Do you know what he was afraid to talk about in detail?  The pedophilia on planet Earth.  The numbers of people being taken off planet, used as food, sex slaves and worse.  You know what he said on my interview?  It is far worse than even I imagined.
So go ahead pretend I am crazy.  Pretend Mark isn’t telling you the truth.  Close your ears and your eyes and pretend it’s all a lie.
But you do so at your own peril.  And at the risk of your children.  And their children’s children.
Do what you will with what I have provided.