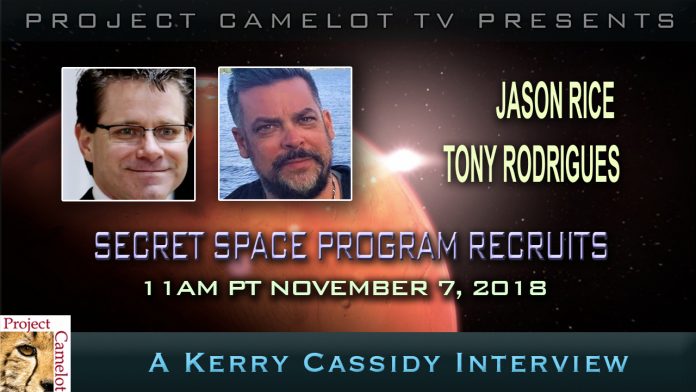 My interview with Jason Rice and Tony Rodrigues for some reason did not record on video. This has never happened before. But luckily I recorded the whole show is now available to view below… mainly audio with some video toward the end.

Both claim to have memories being MiLAB soldiers who ended up on Mars and the Moon at times in their careers.  See below for more info…

At the age of two, Jason was befriended by a human-appearing visitor named Stian whose mission was to observe and learn about the Earth’s cultures and people. This friendship marked a very pivotal time in his early childhood and his desire to interact with Stian explains why he became something of a determined escape artist. He would disappear from home without a trace and get picked up some hours later by searching neighbors, friends, his parents or the police. Understandably, his parents were very concerned and at wits-end about ending these disappearances. This is what led to his enrollment in a local university’s experimental behavioral study program in 1974. As it turns out, this experimental behavioral project was also being used to identify possible candidates for the MILAB program. The military abduction (MILAB) program is one of several organizations responsible for finding, training and indoctrinating uniquely skilled children for service in a variety of unacknowledged classified programs.

Jason was identified as an intuitive empath (IE) while enrolled in the experimental behavior study and was later recruited into a MILAB program in 1977, learning and training alongside other children. 1986 marked the end of a seven plus year MILAB training regimen.

At the end of his tour of duty, any and all memories pertaining to his training for and service in that program were removed from his conscious memory until they started resurfacing decades later. The majority of his memories from this active duty period remain hidden from his conscious mind.  The period following his return marked a turning point in his life’s journey.  In 1991 he graduated from high school in the top 10% of his class and started college that fall at the Florida Institute of Technology (Florida Tech) in Melbourne, FL with a US Army ROTC, four year engineering scholarship. He began his service in the Army Reserves that same year.

Jason began specialized training in 1994 to serve as an officer in the ground forces of the Interplanetary Defense and Reaction Forces (IDARF) secret space program while he was a student at Florida Tech. The IDARF program is the result of an agreement signed in 1991 between Earth’s ruling elites and the Mars-German breakaway civilization. The agreement stipulated that Earth provided sufficient ground forces to field the equivalent of two divisions of soldiers in the IDARF, about 24,000 soldiers, in exchange for the leasing rights to an existing Lunar base the Mars-German breakaway civilization had initially pioneered but were vacating at that time.

Jason was commissioned into the US Army Corps of Engineers as a Second Lieutenant in December 1996 after graduating with a bachelor of science degree in civil engineering from Florida Tech. Two months later, his commission was transferred to IDARF as a ground forces officer and marked the start of his Career Return (a.k.a. 20 and back) in that unit. His early career in IDARF was spent entirely in the forward deployed units of the Mars-German 3rd Panzer Division.  His IE abilities were a requirement for and greatly aided the successful interaction and communication with countless alien races during a career that took him to distant solar systems where he trained and fought alongside indigenous populations defending their home-worlds against false-flag interstellar invasions.

His professional life since returning from the IDARF Career Return program (a.k.a. 20 and back) in 1997 has included a successful career as a multi-discipline engineering design and construction professional. This professional career has included the design and construction management of municipal storm, water and wastewater treatment facilities, commercial and residential steel and reinforced concrete structures, multi-story education and commercial buildings, commercial, residential and industrial HVAC systems, commercial, residential and industrial electrical distribution systems, industrial and manufacturing processes, residential and commercial subterranean structures, residential pools and commercial aquatic facilities with projects traversing the world. He has managed teams of up to eighteen administrators, technicians, scientists, surveyors and engineering staff members for clients that included local, state and federal government agencies, residential homeowners and commercial entities.
Tony Rodrigues:  interviewed by Michael Salla and several others
www.exopolitics.org/20-years-a-slave-in-secret-space-programs-exonews-tv-episodes-3-4/
Link to interviews :  trooder.com/tonyrodrigues/tony_rodrigues.php

Apparent Score years and back program participant after making contact with the son of an alleged illuminati  Tony had always had memories of a standard alien abduction
and odd memories that didn’t make sense.

In May of 2015 had an MRI scan done and within weeks had huge chunks of years of memories come back that connected all his odd memories of time served both
on earth and in space programs:

later to be sold off to secret space programs where he served a short time on Mars
as a support soldier for Mars Colony Corp.

When the Mars program was cancelled he was traded off to the Ceres Colony Corp where he lived for over a decade.
Working on German ships as a repairman and eventually cargo engineer on
interstellar trade missions.

Tony sought help with researchers only to be invited to do interviews of his memories.
tho he had never in his “normal” life visited Seattle – his memories of living there during a
twenty and back lead him back to confirm and be shocked to find that indeed
everything he remembered was still there and true.

Tony since has been an advisor to a foundation on the pedogate elite practices in an effort to stop human trafficking
and has worked with hundreds of people with similar types of memories.
As well as authors for books and movie productions based on the Score years and back tech.

Tony expects a detailed book of his account to be finished by the end of 2019.