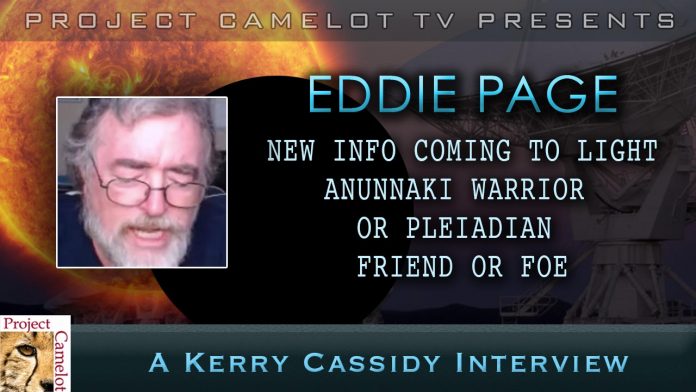 New info is coming to light about Eddie Page.  Perhaps you haven’t seen my statements made about the issues with his testimony?

UPDATE:  Maggie and Ari are postponing their appearance on my show at this time.

EARLIEST TESTIMONY ON EARLY VIDEOS :  WHERE EDDIE WAS CLAIMING HIS FATHER WAS A 4FT TALL GREY!

Evidence from Ari about the photo Eddie claimed was a console of a Pleiadian ship:

Paul L. 15 minutes ago · Automatically held
“I’m a believer in ETs & UFOs & spirituality etc but I have 100% proof Eddie is a faker. @ 5:23 in video he shows inside the mother ship but that photo is a snapshot from a video game called “Secret World Legends” taken in the headquarters of the illuminati. Also in a previous video Eddie claims a UFO to be the Pleiadians but it’s a photo taken long ago in the book UFO Contact From Planet UMMO. Very sad! 🙁
▼

Paul L. 13 minutes ago · Automatically held
Just go to Google Images and then search for the following words: secret headquarters of the illuminati”

The above quotes were Sent to me from Ari and apparently were also seen by Eddie.
My note:  The photo could easily have been leaked and then used to build a game.  This happens a lot.
More evidence.
Regarding the position of Michael and Daniel (Eddie’s Pleiadian brothers):
Ari Kopel has been contacted by Eddie’s brother Michael and both Michael and Daniel disagree with Eddie.   (Especially regarding his recent post about Trump and on other matters).  Michael has verified that Eddie lied about the photo of the ship.  The brothers (according to Michael) disagree with Eddie on many things.  We know this for a fact.  They are the ones who told Maggie to take down the pages and youtube this is also a fact.
We have asked Michael and Daniel to come forward in public but they have refused so far.
********
Also, SEE MY previous AUGUST 23rd “Letter to Eddie Page” posted on this site here and go below for my complete overview of the current situation.
Update Sunday, September 16, 2018: Eddie has agreed to appear on my show soon to address these issues.

At any rate, it begins to appear that he is mind controlled (heavily and deeply).  His ‘vindictive God’ tirades (posted for all to see on his Guest blog on my channel) were a giveaway that his “father” who of course is not “God” (which he admits), he sees as a punishing vindictive guy out to either supposedly:
1.  Rescue and protect humans from a coming war with Draco.
Or
2.  Aiding and relishing the coming (and current) destruction of humans caused by various weather wars type events such as hurricanes like Florence and Yellowstone erupting triggering all the west coast volcanoes in the process… (His latest prediction says another hurricane/superstorm is going to hit Maryland).
You can’t have it both ways.  Many years ago I was warned about Ufos attempting to ‘rescue’ humans who would end up as ‘food’ for the Draco.  My dream/vision was very clear on this point.
Now, Eddie has been caught in a few lies recently involving pictures of craft (and control panel) on an interview he did with another host called “Ari from Shattering the Matrix’.  I am in contact with her and apparently, he claimed a photo from a sci-fi game (if I understand what they are saying)… is the inside of a Pleiadian ship.  Either the photo is from a game (assuming the gamers didn’t have access to classified photos of real Pleiadian ships) and so Eddie is lying.  Or, as is possible Eddie is deceived because the inside of the ship looked so much like his memory he mistook it for such.  Things like this can happen in this strange world we live in because:
1.  There are Pleiadian ships
2.  According to the testimony of William Tompkins Pleiadians helped build our secret space program so our ships will be modeled after their ships and so very likely LOOK SIMILAR in design and behavior.

WATCH My Interviews with Eddie here: