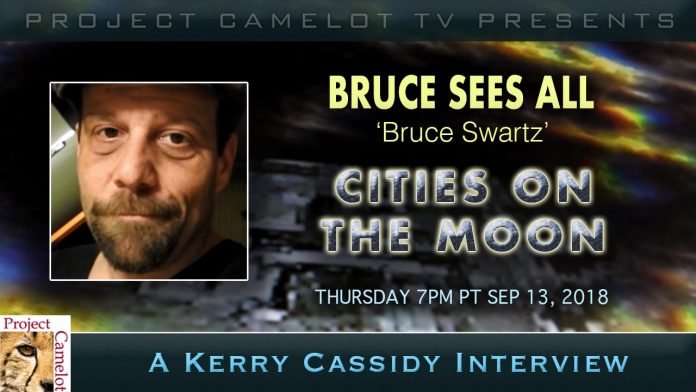 TONIGHT AT 7PM PT THURSDAY SEPTEMBER 13, 2018  I interview Bruce Swartz the filmmaker who photographs structures on the moon.

..”I Operate A Celestron 1400 HD Computerized 14 inch Telescope with a 38 inch Optical Tube wit the DSLR and Adapter at the back 24 megapixel camera… 3910mm of Focal Length… I caught Asteroids Planetoids, Unknown Planets Meteors Planets Stars and Nebula’s in I have photos I got myself of the Constellations of Orion- Andromeda-Taurus-Virgo-Perseus-Bootes and many more. My technique in lighting and magnification has given me the ground level view of our Moon and exposing all the cities and massive structures on the Moon. Please take the time to view my work it is real. The surface of the Moon is very colorful. I have started a campaign link to raise finds for a bigger telescope to have a free channel on YouTube and to show it all. HEAD TO BRUCESEESALL.COM MY NEW WEBSITE FOR ALL MY ASTRO PHOTOGRAPHY. The Moon Is Inhabited Or Visited Often. I Can See Them.”–Bruce Swartz link to his youtube channel here:  www.youtube.com/user/MrBrucy666/featured