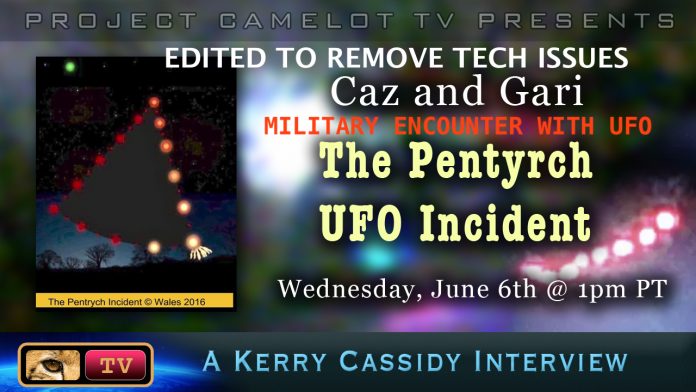 At 1pm PT I will be interviewing Caz and Gari, witnesses to the UK Pentyrch incident.

Short description of the incident:

Multiple witnesses of a huge inter-dimensional UFO and other lights. Military planes and helicopters, a chase, explosions, physical effects such as shaken buildings, damaged trees and wreckage on the ground. An Apache helicopter landing with its cockpit on fire. FAKE snow and mystery men in white coveralls. A cold winter night in South Wales in 2016.  EVIDENCE OF THE ON-GOING WAR WITH ETS…

See below for Guest bio(s).

Caz Clarke has long had an interest in ancient history and the origins of man which have fascinated religious and scientific communities for centuries. She is one of two primary witnesses of what is probably one of the greatest UFO cases in modern times, not just in the UK but maybe even the world.
Gari Jones has spent the last 10 years or more researching many subjects such as UFO’s, False Flag Events, Ancient Civilizations & Histories, Forbidden Science and Technologies. Gari joined SUFON in 2015 and became an active investigator in UFOLOGY