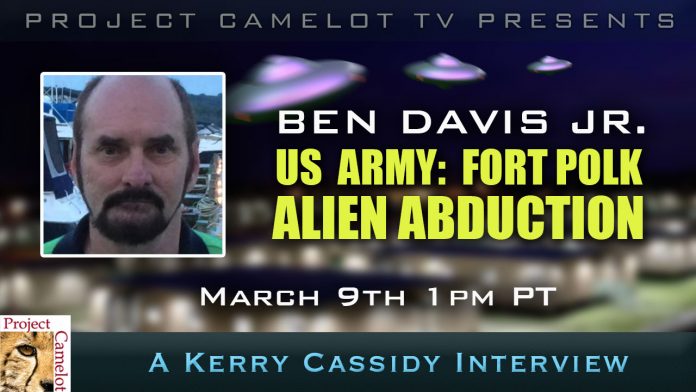 I interview Ben Davis, Jr. former U.S. Army now targeted individual who experienced an alien abduction at Fort Polk while in the Army.  During the abduction he was told to steal a DIRECTED ENERGY WEAPON or the Earth would be destroyed!  So Ben and 4 other soldiers stole the DEW and buried it on the base.  It was discovered by the military shortly after and the soldiers were interrogated and mind controlled to forget the incident…. This is a fascinating story unlike any you may have heard.  This is yet another example of how our troops are being trained to fight aliens!

See below for his bio.

SHORT BIO:   “My name is Benjamin R Davis, Jr, the only son of a WWII, US Navy Frogman, whose father was the only MD in a 3 county rural area of N Florida. My mother, June J Davis, is still alive and is 90 years old. I graduated from Leon High in 1973, went to TCC and dropped out, only to find out that the Selective Service Act sent me a draft number of 4. SO… I decided to beat the draft by volunteering and was denied entry due to a bone disorder from age 6 to 11 & 1/2 years old. But during my entrance exam, I scored on 4 categories 100 on 3 of them and 95 on the 4th one. It never dawned on me until the past 5 years, that my high intelligence is what the Army wanted from me… I am considered a borderline genius…
I became a 12B Combat Engineer, stationed at Fort Polk, La, until the day that I believe, is when I was abducted, taken up into a space craft, went to the future (2026) and was ‘shown’ events of my future… Including a daughter that I was to have and the mother of that daughter, who just happens to be 1sr cousin to John T Vasquez (deceased) author of Incident at Fort Benning. I wrote my book before John published his, but I never knew John prior to that day. The rest is now history, because I have never shut up about Alien abduction and the Incident at Fort Polk… and my family thought I was a nut case… until my daughter, Crystal Rose, was conceived… and she is now a Sergeant in the USAF and has birthed 2 grandkids to me…
I truly believe that what I wrote in my books is the KEY to saving the human species… verifiable PROOF that is in the Patents and the content provided by the ex-MIT professor on Mind Control through the greatest invention to ever come to earth, and what he calls the BioAPI ‘wetware’.. that will be at 100% very soon… probably when the 5G network is activated… I know that what Cory Snodgres talks about is a fact… and now that I found the Patents to this TRUTH… it is my ‘duty’ to complete the mission that I somehow ‘volunteered’ to do and this will be my final interview… because… It’s About TIME: to tell the tale that we humans must save ourselves from each other.. and not from a Machine (AI)…”–Ben R. Davis, Jr.