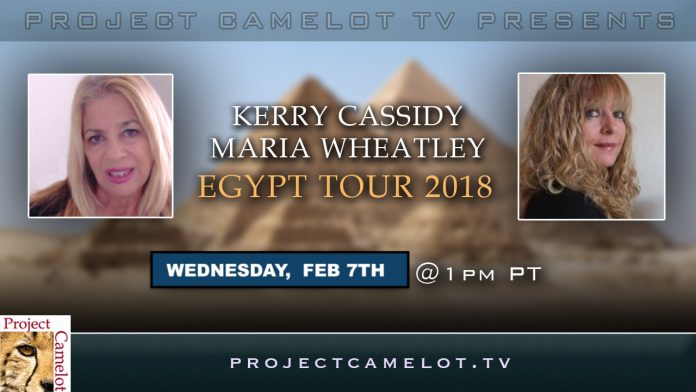 Maria Wheatley was my guest on Wednesday.  We discuss our upcoming EGYPT TOUR, the fascinating sites and how dousing and energies change our consciousness.  Join Us!

Go here for more info on how to join the Egypt tour in April!

See below for Maria’s bio:

Bio taken from her website:   Maria is a second-generation dowser who is a leading authority on the geodetic system of earth energies. She was taught how to decode and divine the land by her late father, Dennis Wheatley, who was considered to be one of the UKs top Master Dowsers.

Maria is an accomplished author of books on sacred sites and dowsing. She has researched the esoteric design canons of prehistoric sites, Druidic ceremonial enclosures and the Knights Templar for many years. Maria has studied Neolithic Britain and Bronze Age prehistory with the University of Bath and alongside other professionals, Maria combines her knowledge of archaeology, and earth energies with state of the art equipment to locate and detect the hidden frequencies that the Earth emits. Believing in the Earth Force or dowsing is simply not enough for Maria, she wants to show the world that the prehistoric designers of ancient sites could locate and harness earth energy. Her findings challenge our understanding of sacred sites.

Maria has lectured and given workshops in America and Europe and has also appeared on the History Channel – she managed to get several of the participants who had never before held a dowsing rod – to successfully detect ley lines at Stonehenge,

In the late 1980s, Maria studied astrology and tarot and during the 1990s turned her attention to hypnotherapy, past life regression and reflexology. She has taught complimentary medicine for Swindon College for over 15 years. She has also written holistic diploma courses for private colleges such as the British School of Yoga (BSY Group). She recently founded the Avebury School of Esoteric Studies which offers certificated courses on holistic subjects including past life regression, astrology and dowsing and which is affiliated with the Association of British Correspondence Colleges.

Cosmologist, healer and author of HOPE Dr Jude Currivan endorsed The Avebury School of Esoteric Studies and has this to say:

In the mid 1990s, I was very fortunate to be introduced to and guided in the art of dowsing by the great master dowser Dennis Wheatley. Dennis’s enormous knowledge, straight-forward approach, easy companionship and willingness to answer all my questions(!) made him the perfect teacher. I’m delighted that his daughter Maria now continues the family tradition of sharing this wonderfully valuable art and science with the world.

Maria’s vision is to apply ancient wisdom to a modern generation. Imagine for one moment if we could integrate the Earth’s healing and harmonic energies into hospitals, care homes, and schools. Another example, one global grid system is said to enhance our powers of communication and so Medieval Masons placed the pulpits of old churches on this grid line. If we could incorporate this energy into the classrooms of dyslexic and autistic children or those suffering with speech problems I am sure we would see a vast improvement. Living in harmony with the Earth’s subtle frequencies is beneficial for all.