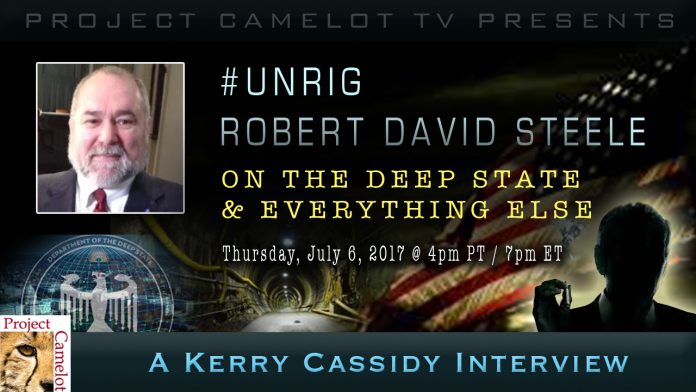 I interviewed Robert David Steele, former intel officer for both CIA and the Marines, on July 6, 2017.

Robert David Steele is unique for being a former spy — the most published intelligence reformer in the English language — as well as the top Amazon reviewer for non-fiction, reading in 98 categories, and also recently nominated for the Nobel Peace Prize. A long time manager of a global small business who has trained over 7,500 mid-career professionals from over 66 countries in open sources and methods of intelligence, his current passion is a non-profit educational company, Earth Intelligence Network (EIN).  EIN has designed a World Brain construct and a PhD in Stewardship that emphasizes holistic analytics, true cost economics, and Open Source Everything Engineering (OSEE).  This summer EIN is sponsoring #UNRIG, a 90-day national tour with Dr. Cynthia McKinney to educate voters on how they can take the power back across 435 Congressional Districts. Each District will soon have a #UNRIG MeetUp that could lead to forcing all 100 Senators and all 435 Representatives into passing the Election Reform Act of 2017 in September. If successful, Steele and McKinney envision the restoration of integrity to our government, to include a total commitment to evidence-based decision-making in the public interest. His motto is “the truth at any cost lowers all others costs.”  Learn more about him at robertdavidsteele.com, and about the campaign at tinyurl.com/IndieGoGo-UNRIG. He blogs at phibetaiota.net.

See my must read article as prep for this show!