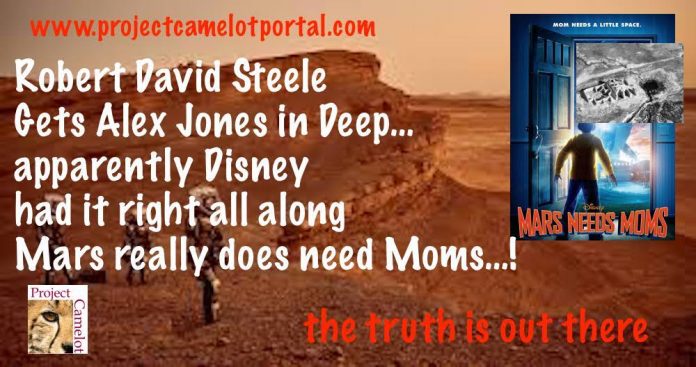 Robert David Steele, a former intel agent for both CIA and the Marines has been interviewed by Alex Jones saying there’s a slave colony on Mars… and children are being kidnapped and sent there (supposedly to arrive after “20 years and out”) — meaning the children would be age 20 or over when they arrive… Now we all know there are colonies on Mars.  And calling the humans working there slaves is probably a matter of your point of view and depends which humans you are talking about.  Humans are also slaves here on Earth where sex slaves and human trafficking are rampant.  The situation is likely similar on our sister Planet.  However, being taken forcibly off Planet Earth to live and work on Mars lends a whole new dimension to the term ‘slave’.

Camelot witness Arthur Neumann claimed back in 2006 to have gone there for lunch and worked there on and off for years as a scientist in the Secret Space Program.  This was reported here on Project Camelot projectcamelot.org/henry_deacon.html initially in conversations and later on stage at the Exopolitics Summit in Barcelona.  Long before Corey Goode was on the scene. Other Mars witnesses have come forward over the years.  If we have a Mars colony (as reported by Bob Dean repeatedly) then we are using a space-folding method of travel that does NOT take 20 years but rather minutes.  Steele apparently also said the “wormhole capability was lost in 2012″.  This is nonsense.  You don’t lose a wormhole/portal… CERN can testify to this.  If one closes you simply open another.  See vortexes – toroid physics of wormholes. 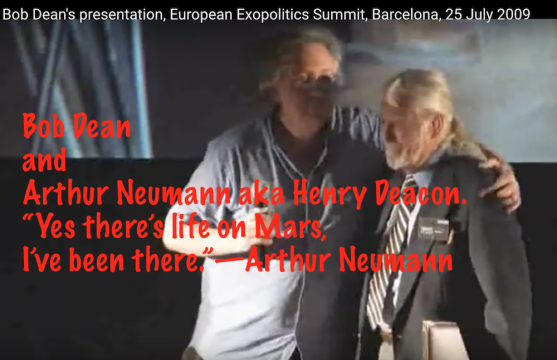 However, it is important to realize that as always, MARS NEEDS MOMS the Disney animated movie from several years ago was also putting this out to the mainstream.

While Robert Steele was actually elaborating on the dire situation we have here on Earth as recently highlighted by the CARDINAL GEROGE PELL multiple sexual assault and abuse charges  (a close adviser to the Pope).  None of the above should distract us from this key point.

What this reveals is how rampant the sexual abuse of children really is and also reminds me of the sudden withdrawal by William Tompkins from doing a 2nd interview with me when invited back to elaborate on his comments from my first interview with him about the extent of the abuse of children and human trafficking.  (See Part Two of my interview with William Tompkins at 54:13 minutes in).  And now, we have Robert Steele also refusing to answer Alex’s call out to him to examine his statements further as well as my own invitation to him to do so here on my Project Camelot TV live weekly show on Youtube.   [Update:  Robert David Steele has agreed to be on my show on Thursday, July 6, 2017 @ 4pm PT / 7pm ET!  Click here to view.]

Why is everyone so shy once they have come bravely forward to state that children are being disappeared, sexually abused and humans in general are being tortured in Satanic rituals worldwide?  One wonders who is getting to these two brave whistleblowers?

Needless to say once this breaks wide open, via Pizzagate and the recent revelations regarding Cardinal Pell it will go to the highest reaches of government especially in the Western countries such as Britain and the U.S. as well as many if not all of their European allies.

Human sexual abuse and trafficking as well as torture and killing is endemic to the systems of power on Earth, that much is clear.  How long this has remained behind closed doors in the corridors of power is likely a more 20th Century short sighted view of history spun by the perpetrators.  Back in the days of Rome these matters were far more widely known and endured by the masses who had little say.

The Vatican and world governments are run by Reptilians and the Reptilian agenda involves feeding off the fluids and energy of human prey both adult and the young, especially the young.  The root of sexual abuse is centered around feeding off the orgone (as it is known in the West or Kundalini energy as it is known in the East) of humans.  Torture and abuse brings the energy to the surface and acts as an aphrodisiac to these beings.

When you realize that we are dealing with a huge history of humanity whose genetic manipulation by various ET races includes a large number of bloodlines (especially the blue blood/illuminati blood lines) being infiltrated by Reptilian DNA only then can you begin to understand the depth of the problem.  How do you cure a vampire?  How do you stop a Reptilian from following out their nature?  The Bush family and many of the ruling families and many of the human races have a genome heavily infected by this DNA.

It’s time people recognize what is really going on here on Earth (and on our colonies such as Mars, the Moon and Moons of Saturn and Jupiter and beyond).  Depending on the degree of reptilian DNA a person has they will be easily manipulated into being swayed by their baser instincts.  This is how Congress and high officials worldwide are controlled.  Getting beyond the shock and horror over the real truth behind the use of humans as prey and sexual slaves by the elite as well as off planet races as disclosed by Captain Mark Richards in my series of six interviews, you can begin to come to terms with figuring out how we on Earth are going to deal with this reality.

Whereas Alex Jones is dismayed by the taken out of context ‘slave colonies of children on Mars’ comments by guest Robert David Steele, which he staunchly states he doesn’t believe, he is now officially in deep.  Instead of avoiding the ET, aliens from other planets scenario he should, like any good reporter be following the story where it leads.  And this story leads to a lot further down the rabbit hole than he is willing to go, at least in public.  He would have to be brain-dead not to know more than he lets on….  And this might be a good time to come clean.

Bob Dean with Henry Deacon aka Arthur Neumann on stage at the Exopolitics Summit in Barcelona.  For Arthur Neumann stating he has been working on Mars go to 54:38 minutes.

Parts One and Two.  Comments made by Tompkins about pedophilia and human trafficking are in Part Two and starts at approx.  54:13 minutes where he says… “To me, and I know all about it…and I hate to say that but it’s far worse than you just said.”  He is speaking at 54:13 in reply to what I say… “…but you do know that Reptilians and Draco, that the blood sacrifices, the whole Luciferian thing, the kids being killed and eaten, I mean, that humans have been eaten taken off planet etc. and used for slaves in other colonies and etc. etc….”