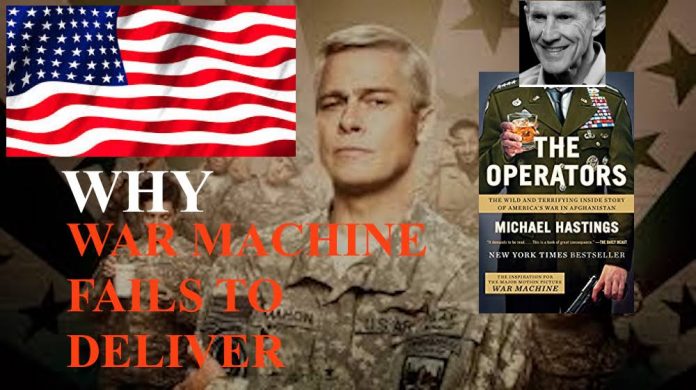 A Review by Kerry Lynn Cassidy

The film for Netflix, directed by David Michôd; starring: Brad Pitt called WAR MACHINE wants to hark back to the days of Joseph Heller’s Catch 22, a satire of WWII pilots and Dr. Strangelove, another anti-war satire, unfortunately it fails miserably for a number of reasons.

First of all, the purposely stiff performance by Pitt does not resonate with the presumed objective of the filmmakers to deliver an over-the-top satiric look at a General gone mad amidst equally mad circumstances.  Pitt is supposed to be depicting the key figure in the book by Rolling Stone journalist, Michael Hastings, THE OPERATORS.  Hastings was an “embedded” journalist with General Stanley McChrystal and his troops back in 2009, who was  being moved around on the chessboard of war and international politics in what seemed like a series of designed maneuvers to basically make his job undoable.

The sad thing about the use of the Hastings story as the backbone resource for WAR MACHINE is that the book THE OPERATORS is simply not a satire. On top of that behind the book is the real story behind the subsequent bizarre death of the author in what are highly suspicious circumstances.  It is said that Hastings hit a tree in Los Angeles sometime after publishing his well written and insightful book.  The engine of his Mercedes is strangely said to have lept out of the car and landed some distance away after he lost control of the car and hit a tree.

There is reason to believe that after having been embedded with McChrystal and given intimate access to the day-to-day workings of the military efforts in Afghanistan as well as traveling to Europe with the General and his team (as depicted in the film) Hastings simply ‘knew too much’.  He was said to be targeted by a drone (according to testimony off-the-record from a whistleblower to this author) but there are also other mysterious circumstances surrounding his death, including his ongoing investigation into then-CIA Director John Brennan.

Hastings book profiling General McCrystal is said to have been the cause for then President Obama’s request for his resignation.

…”Five years ago, Army Gen. Stanley A. McChrystal was rocked by a scandal: He and several members of his staff made cringe-worthy remarks published in an infamous profile in Rolling Stone magazine.”–The Washington Post – article by Dan Lamothe

Fast-forward to WAR MACHINE and the efforts to depict McKrystal, a perhaps dramatically inclined, outspoken and brillant General called “…One of America’s greatest warriors,” by Secretary of Defense Robert Gates.  McChrystal as described by Hastings may have a flair for the dramactic but not to the extent of say, a George C. Scott level of performance.

In actuality, McChrystal was given complete command of the troops in Afghanistan after having worked in black projects for the military in an above top secret capacity.  This would seem to point to the General as being a highly trusted member of the upper echelon of the command and control apparatus of the United States.

However, despite McChrystal’s sincere efforts to whip the scene in Afghanistan into shape he failed.  His mission was in essence, to orchestrate the roll-out of an American control structure on the Afghan people within an invasion scenario.  It is easy to see, that his efforts to get his troops to, at the same time, ‘make friends and influence people’ while killing and conducting a strategy of aggressive intimidation of those refusing to buy into takeover by an invasionary force of their country, were doomed to failure.

WAR MACHINE attempts to make the General and his cohorts into a group of buffoons while on a serious mission presumably as a result of the 911 attack on America: a bogus effort to blame a CIA-trained group of so-called Muslim terrorists called Al Qaeda or AL-CIA-Da depending on who you talk to, for the attack on the World Trade Center and Pentagon also known as 911.  While the cover story is still accepted and believed by countless sheeple and severely uninformed members of the masses including presumably the lower ranks of the military, it has widely been revealed to be an inside job orchestrated by top levels of the American Government by individuals who are members of a ruling cabal lead by ‘Daddy Bush’ and planned and orchestrated by Cheney and the usual suspects as well as their Nazi influenced and taken over members of the upper echelons of whom, Rockefeller and Rothschild are among.

While it’s a given to those reading this, that the so-called oxymoron, ‘war on terror’ is nothing more than a rationale for invasion and take over as part of a larger New World Order agenda. Even though the top levels of the military and intel agencies (Army, Navy, Air Force, NRO, CIA, NSA and many others to numerous to mention) must be somewhat clued-in enough to know that this string of wars across the globe are thinly disguised imperialist invasions of countries with resources the perpetrators find useful and necessary to further their ambitions in support of building not only a One World Order but a Secret Space intiative (Star Wars and Beyond) that depends on it to feed it’s coffers and extend it’s outreach into the cosmos at all costs and without restraint.

With the above basics in mind, let’s take a look at the film WAR MACHINE and why it so completely fails not only at satire and humor but also as an anti-war commentary.  In attempting to model itself after excellent satires as mentioned DR. STRANGELOVE and CATCH-22 that depict the perpetrators of mad war schemes and military leadership gone amok, on greed and egotism, it misses the Zeitgist of these times sorely.  Instead it falls flat time and again such as for example, worthwhile attempts to show the absurdity of growing poppies for heroin are revealed to be a level of deceit which they claim has to do with nothing more than the greed behind industrialists to dominate trade.  This falls flat because growing heroin that then makes its way back to the shores of America and destroys lives of our young people and runs rampant increasing crime and overflow of our prisons, is simply not funny.  It is not incompetence or stupidity that rules our military but rather an agenda that most of them have simply no clue about.

While at the same time, anyone who is aware of the true nature of what’s really going on, knows that the whole “war for oil” is also a cover story hiding a far more insidious reason for the military intervention in Afghanistan, Iraq, Syria and other places on the globe where its actually key metals used for space travel such as iridium and lithium along with the need to dominate the wilder parts of the globe as part of a surveillance agenda involving subduing the races for use in the War of Worlds currently being conducted on and more importantly, off the planet.  In other words war in these countries while useful on a myriad of levels also provides an important cover for war with off-planet invasionary races who have multiple agendas.

As one of my whisteblower contacts says, the wars in the Middle East and Afghanistan are used as covers for soldiers who are deployed much further away to places like Mars and moons of Saturn and beyond.  When they return their minds are wiped and they are given screen memories of doing battle in the streets of Iraq and Afghanistan….

On top of this, the scenes within the film of the Presidential snubbing and evasion aimed at keeping the General out of the loop and in a state of confusion, while likely to be somewhat accurate to what really happened, only further serve to depict the General and his team, as fools and flunkies.  None of this makes any sense to audiences who on the one hand are watching their sons come back in body bags while fighting for these generals or to those who are well aware that the entire mission is a facade for a much more diabolical agenda.

While some unsuspecting members of the public may well watch WAR MACHINE and wonder whether to laugh or cry or get angry, those of us with a more perceptive view know that this is a weak effort to perhaps reveal some level of the hypocrisy behind the invasion of Afghanistan and Iraq, and now Syria.  But even then it rather makes one cringe with pity for the director and the unsuspecting cast, including presumably, Pitt, who while well meaning are actually failing by design because they have no idea what the real truth is and are acting out roles in a very real war of worlds that they have no idea they are part of.  And which, if they knew the truth, is no laughing matter or even material for satire when the fate of the human race hangs in the balance.

McChrystal on the Rolling Stone scandal: ‘You’re going to find out who your friends are’