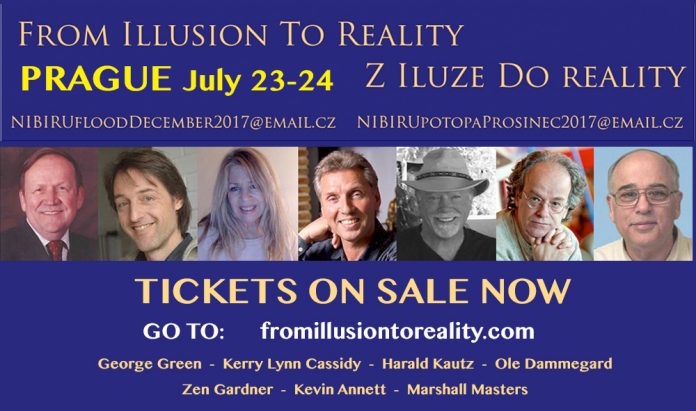 Hi Eva and everyone reading this forum,

Sorry I missed connecting with you in Prague. There wasn’t much time there and I wasn’t online so didn’t become aware you were in town until after I left and had time to look at email.

The whole conference was quite strange but the speaker presentations including my own were all video taped by a couple from Poland for Alexandra Berg (the organizer) so they will be available soon I believe. (I have a copy of my own presentation that Neil (my partner who is helping out Camelot now and for the past 3 years — (see about us page on Project Camelot for more about Neil) filmed and can post eventually if needed.

Alexandra did her best against many odds to get this conference off the ground but she is not familiar with doing much social media outreach and other than my Camelot social media posts and video updates, we don’t have any local connections in the Prague area… so almost no one showed up except maybe 6 people!! We were prepared for this however deciding in advance to just film the thing as best we could and then put it out over the web after the fact.

Special thanks goes to Alexandra Berg for her kind generosity in spending her own money to get all the speakers there, cover our hotel and transport costs and fund the rental of the conference venue. The venue itself was in a very spooky old underground auditorium 4 or 5 floors down.. We were surveilled heavily and have reason to believe they were simultaneously filming all of us and the conference as well!!!

She is a concerned and caring activist and trying to get the truth out. She is a highly educated psychiatrist (from Sweden although actually born in Prague)… I tried to advise her in advance regarding the challenges of putting on conferences but she went her own way. I think perhaps her next venture in October will be more successful.

My UK conferences were both sold out but very small venues and this seems to be the best approach at this strange time we are dealing with. We are working hard to get the filmed presentations from Malta and the UK up on my Vimeo channel where we will charge a very small amount to try to keep Camelot operational. At this time, I am in debt on my credit card due to too much travel and not enough income… So donate or watch the conference footage if you want to help keep us going.

I can say we visited the castle and church overlooking all of Prague and the place is riddled with satanism and blood sacrifice. This I saw on the etheric level as well as felt while on the premises. It’s been a control center dominating the city for centuries no doubt although perhaps largely abandoned at this time. There is a gleaming new-ish obelisk in the middle of the square between the Castle and dark Church, sitting on a rather massive platform of pink granite topped by a golden triangle however so the evidence of mind control and the presence of the controllers is rampant. Not only that but Prague (specifically the heavily tourist area also called the old town) is what Walt Disney modeled Disneyland on, so I hear, and I can tell you that the mind control elements and false reality mixed with so-called fun (toys, beer, ice cream and puppets) are everywhere. It’s the kind of place where you can hear subliminal songs like …”It’s a small world afterall”.. running inside your head nonstop.

I am not putting down Prague in total because we only saw mainly the mad tourist area and didn’t get a chance to see some perhaps more interesting sides of the city. But I can say that Illuminati Magicians would feel very much at home there… as they are in most major cities.

By the way, I am in excellent health…. Please see my recent updates on Project Camelot for more about my work.

SPECIAL NOTE:  One of the Prague speakers, Kevin Annett was detained in NYC and prevented from flying to speak in person.  He will be speaking via video instead.  See below.

ITCCS sources have confirmed that the “Holy Alliance” – the Vatican’s spy and assassination bureau – have targeted eleven officials of the ITCCS for “silencing or elimination” on or before August 15, 2016: the date of the next major Ninth Circle sacrificial killing. One of the eleven targeted officials is Rev. Kevin Annett, the ITCCS North American Field Secretary.

According to the source, the Catholic Ninth Circle cult is planning a series of child sacrificial killings on August 15 in Montreal, Washington DC, London and Rome. The Vatican is worried that the planned involvement of its top officials in these rituals, including Pope Francis and three Cardinals, may be compromised by ITCCS disruptions, as happened in Montreal two years ago.(see itccs.org/2014/08/17/breaking-interview-child-sacrifice-in-montreal-disrupted-arrests-made/)

As part of this new attack, on July 20 Kevin Annett was detained and held for a day without charges by Homeland Security police in New York City, and prevented from travelling to Prague where he was scheduled to speak this weekend at a major international conference. He was then ordered out of the USA by July 28.

Commenting on his arrest, Kevin commented,

“These attacks aren’t just coming out of Rome, but Canada. Recently, ITCCS helped a government insider there come forward with hard evidence that since the spring of 1998, the Prime Minister’s Office has targeted and killed aboriginal eyewitnesses to genocide and child trafficking. (see itccs.org/2016/07/08/secret-black-ops-program-identified-by-canadian-government-source-2/). We also have learned from this insider that the continuing disappearance and murder of native women and children across Canada is being conducted by the same government and Vatican-sponsored ‘black ops’ teams.”

Kevin Annett will be speaking to the Prague conference this Sunday by television link. In September he will be conducting a global speaking tour based on his two new books, Unrelenting: Between Sodom and Zion, and Murder by Decree: The Crime of Genocide in Canada. (amazon.com)

The ITCCS office in Brussels is the coordinating center for the Tribunal.

The complete Common Law Court proceedings of Genocide in Canada are found at:

An International, multi-lingual ITCCS site can be found at: kevinannettinternational.blogspot.fr/