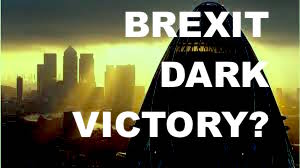 From my perspective the public and perhaps especially the alternative media are losing the plot when it comes to Brexit.  Rabid nationalism is rarely a good thing and in the case of what I see going on around me being currently in Britain at this seemingly momentous time is no exception.

One thing that I find interesting is that Kameran Faily who worked for many years for the City of London Banksters had cautioned in one of my interviews referring to the time of the Scottish referendum back in 2014, that the Illuminati (or elitists or globalists or whatever you choose to call them) plan was to isolate the City of London from the rest of the UK.  He said this was the long term plan.

As it happens, fast forward to June 2016 by way of a referendum which was planned 2 years in advance by David Cameron’s government to take place at this time, resulted in just that with the City of London voting to remain and the rest of the country voting to leave.  Where things go from here is not clear but in the same interview Kameran Faily said that the Queen refused to ‘let Scotland go’ and had therefore insisted on fixing the vote during the original referendum to force Scotland to remain tied to Britain.  Now we have the untidy issue raising its head again as a result of the outcome of Brexit where as everyone knows, Scotland voted with 62 percent to remain.

For those who doubt black magicians being at work Kameran Faily also stated in the same interview that prior to a magical act they require “death and blood”.  Arguably the recent death of MP Jo Cox was just such an illuminati sacrifice.

We also have Northern Ireland firmly in the remain camp.  All of this is a threat to the solidarity of what we know of as “Great Britain”  or the “United Kingdom”.  Obviously not so united after all (if it ever was).

The markets are another case in point indicating a kind of 911 type fiasco where the smart money would have been wise to “short’ the outcome in the day of, in spite of the major U.S. papers calling it a clear vote of “stay”, being found shockingly wrong when the actual count was announced.  So some people made a lot of money off of this and others lost a lot.  Something we see they like to do again and again to line their pockets in preparation for their next moves.

The above coupled with real questions on who the rulers of Britain actually answer to and who is running the place are highly pertinent when looking at the so-called claim of “independence day” coming from people such as Nigel Farage and others.  Independent from what one may wonder?  In reality who is running this game and is Brussels really such an unelected dark operation as some would suggest?

A little historical research is in order when delving into the question.   This article might be helpful in detailing the creation of the European Union.

The European Union was the brainchild of the Nazis, conceived by Churchill, the OSS and CIA and encouraged by America during a time when the former Soviet Union (communism) was seen as a huge impending threat.

It appears that Britain is in fact run by and the headquarters for at least the Rothschild side of the Illuminati who themselves may be reporting to the Vatican / and Black Pope / Pindar and ET overlords… dominated by the Reptilians what is commonly called in certain circles the Luciferian Agenda.  As is the Bush Cabal — Rockefeller side dominated by the NSA/CIA counterparts.

Independence?  Hardly.  What begins to surface is an overall agenda that looks a lot more like herding sheep in a desired direction coupled with letting the ‘steam out of the kettle’ in order to placate some restive elements at least temporarily.

Keeping in mind they have 2 years to sort things out around this supposedly according to what is called Article 50 and can renegotiate the terms of their partnership with the EU culminating in a decision not to exit if they so choose.  At least according to the agreement as it currently stands.  And you have a lot of room for leverage to be applied from the City of London /  Illuminati side of things… which may result in a placing Britain in a more advantageous position.

Interestingly Henry Makow states that in reality, the much more strident and fascistic member of the EU  all along is Britain and not the European side of that equation.

…”Last week Putin suggested that Cameron had called the referendum in order to “blackmail” the rest of Europe. The evidence for this theory is compelling. It should be remembered that for all their self-serving chauvinistic rhetoric, the British Neocons don’t dislike the EU on account of its control by corrupt transnationals and even more corrupt bankers: au contraire they want it to be even MORE controlled by these forces than it already is.”  – See more at: henrymakow.com/2016/06/brexit-what-is-the-globalist-game.html#sthash.KJxJczAk.zVJttwQg.dpuf

Brits rejoicing to be left on their own with their own dark, satanic overlords would do well to stop and consider the above before throwing caution to the wind.

This may also be a planned injection of chaos and concession before the notorious bait and switch tactics for which they are known.  We are, according to many of my sources and even much of the news out there, headed for a global currency reset and overhaul of the entire financial system worldwide.  We at Camelot were told their self imposed deadline for this is the end of 2016.

Can it be such a coincidence that Britain exits the EU just prior to this move?  Some would also toss in the anticipation of catastrophic earth changes said to be coming in 2017, due to the return of Planet X/ Nibiru or some other more manmade or human-ET orchestrated events there is reason to believe that both the U.S. and EU are about to undergo some great reshuffling and perhaps economic hardships.  What would an isolationist Britain stand to benefit by as a result of this sudden move in the face of global chaos?

Keeping in mind an overall agenda of NWO which has always been an overriding goal (one that even disparate elements within the so-called ruling families and their ET partners agree on)… and you have a recipe for ‘order out of chaos’ being put in play in a very premeditated way.

NOTE:  Kameran has an open invitation to do another interview anytime.  At the moment he is not coming forward.

And see all my other interviews with Kameran here: