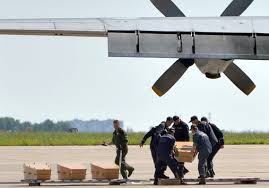 I received the following email from a Source with regard to the treatment of the bodies from the crash of MH17.  This raises further questions about what is really going on:

I felt -and still feel- very positive about the dignity and respect we choose as a Dutch community in how we brought the MH17 victims home.

At the same time, and with the possibility of MH17=MH370 in the back of my head, it now strikes me that, yes OK it was admirable to bring the victims home with full military honours but at the same time, these were civilians. What if the bodies were indeed of flight 370? Then they had to be covered up and ultimately disposed of in a very secure way. Consider this:

1. Once out of Ukraine, the Dutch military has been in control securing the bodies: they were airlifted on military cargo planes to Holland, then off to a military air base in Holland, driven in convoys protected by Dutch military police and directly towards a sealed-off military base. A clever way to secure the possible false bodies under the guise of giving the utmost respect and dignity, as would in such way be supported by the Dutch community.

2. The temporary head of the initial Dutch (civilian!) team of experts, Mr. Jan Tuinder, was not allowed to ride the train after his team had inspected and seeled the train. In stead, a Malaysian official rode the train. When Jan Tuinder was interviewed about this on site in front of a TV camera, he made an emotional impression and his answers were evasive. None of the team experts nor the OVSE wanted to give comment as to why they were not allowed to ride the train to the city of Donetsk. Jan Tuinder was the first to actually have seen the recovered victims aboard the refridgered train. It might be interesting to interview him about what he had seen and why he was taken off the train and replaced by the Malaysian official…