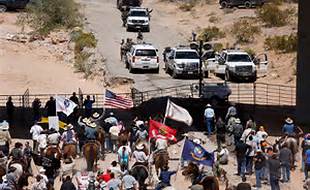 By now, most are fully aware and cognizant of the BLM’s over reach in southern Nevada and the inevitable showdown that resulted in the slinking away by the Feds after a show of support for Cliven Bundy by true American patriots. Now that the mainstream media, aka prostitutes, aka US Government cheerleaders, have weighed in, it’s time to step back and take a macro view of the situation.

Before doing so, a rereading of the Constitution and in particular, the Tenth amendment is advised.

The powers not delegated to the United States by the Constitution, nor prohibited by it to the States, are reserved to the States respectively, or to the people.

So the Feds are in Nevada and many other western states because their puppets in local government have sold out their constituents and in this case, Nevada Governor Brian Sandoval and more particularly, Clark county Sheriff, Doug Gillespie. Gillespie has ultimate law enforcement authority in the county as ALL sheriffs do in every county in every state in the country. The benefit of any kind of push back by the citizens against the tyrannical, out of control government is that the traitors and thieves WILL stand up and identify themselves either by their complete and total silence (Sandoval and Gillespie) or their face time (Harry Reid, Rory Reid, ALL of mainstream media, etc).

Leading up to the ultimate showdown last month, Harry Reid was completely silent. You have to wonder why such a prominent politician would say nothing while a major issue was brewing in his own back yard. Well now we know, Harry and his son Rory have conspired to sell US land to a Chinese energy company for the manufacture of solar panels. This truly boggles the mind and when you drill deeper, you find out Harry has been acquiring land through an LLC, Reid Bunkerville LLC for quite a while.

This article takes us through the research done utilizing public records in an effort to connect the dots. I get asked from time to time what can be done to fight the cabal. I’m hesitant to recommend anything for I don’t know personal situations in regards to resources, background, experience and level of commitment as it relates to time. I do, however, think we are running out of time, the clock is ticking, the frog continues to boil and the incremental infringement of our natural/God given rights almost has us backed into a corner where there will be only one solution left. One I wish not to contemplate but may become inevitable.

The Bundy ranch showdown is a perfect example of why ALL politicians need to go…..straight to prison. I mean, you really don’t think they go into debt to the tune of millions of dollars on campaign financing for a job that pays $176,000 do you?? There are many sources out there that can provide you a list of the net worth of our compromised politicians…..many in the multi-million dollar range. If you care to do the research, you will find that many of these same multi-millionaires didn’t have the proverbial pot to piss in years ago before they were elected.

The attempted heist at the Bundy Ranch and the subsequent development of the solar panel story and the involvement of the Chinese exposes ONE of the ways politicians enrich themselves based on their positions. The best example I can give is when a big retailer wants to locate a store in your town. The politicians find out about it ahead of the public and when the big retailer (think Wally World or Target) purchases that big tract of land, the politicians put their LLC’s and corporations and partnerships together to buy the surrounding land, KNOWING that it will immediately increase in value tenfold once the public is told about the new business and all the jobs it will create. While they pat themselves on the back for bringing jobs to the area, they’re cutting deals in the back room to increase their net worth in the mean time.

Think of it as insider trading for corrupt politicians.

This is just one of many ways they take advantage of their public positions for private enrichment. Calling it a conflict of interest would be an understatement. They care not if they take away our rights, take away our freedoms, take away our real estate and tax us to death to pay for their extravagant lifestyles and all their interns needed for sexual favors. It’s about their personal balance sheet.

Harry Reid could care less about the people he represents, going so far as to orchestrate land deals involving a foreign country (China) while fattening his and his son’s bank accounts in the process. Nevadans…..are you okay with this? This guy is a disgrace….as is Boehner and Issa and McCain and Pelosi and Feinstein and all the rest of them.

So one thing you CAN do is…..investigate the two senators and 1 representative for your own respective states. Go to the Secretary of State’s records and run their names through the search index to see how many corporations, partnerships and LLC’s they’re a part of. Run those names through the real estate records database and see how much land they own. Or what type of business they’re involved with. Then review their voting records and see if there are any dots to be connected. Look at campaign contributions and see if any names, companies, etc intersect with any of this. Look at financial disclosure statements, current and year’s past (if available) and see how their net worth increases exponentially.

Guaranteed you will be surprised at what you find.

Mitt Romney is a perfect example. His financial disclosures prior to the last Presidential election severely exposed him. Millions of dollars of investment income in the form of interest payments and no one asked the question regarding principle balances and where it originated. Had he released prior year’s information, he would’ve been further exposed for the payoff taken from Bush Sr. to defraud Ed Falcone of millions of dollars as we documented in some of the White Hats Reports. Be reminded that this was also the reason McCain picked Palin at the last minute as his running mate in 2008 because Romney’s finances could not be vetted satisfactorily without raising embarrassing questions and issues for McCain to address.

Getting back to the Cliven Bundy ranch subject, I was listening to one of his interviews and he brought up a very valid, interesting point. He asked why the BLM was armed with guns and other weapons when they had no legal right to do so. This set me on a small research task which revealed that the BLM has NO law enforcement authority whatsoever. I checked their site in addition to the US.gov site and found neither confirmation of any authority to carry weapons nor any authority to arrest or conduct any type of law enforcement function.

Even if they DID have law enforcement authority, how do you explain the over the top response to a few trespassing cattle? They should be sent a few hundred miles south to assist the US Border Patrol as is enumerated in the constitution to protect our country. Obviously, the land deal with the Chinese and the enrichment of the Reid family is more important than the security of the borders. Foreign countries could send hundreds of troops to invade southern states but we’d be more worried about getting cattle off land we sold to the Chinese.

The Bundy Ranch showdown gives us a true indication of where we stand in all of this. The people won in Bunkerville because they resisted tyranny with the only two resources they have left…..superior numbers and weapons. Fortunately, no one was hurt, the BLM tucked tail and fled and violence was averted. Sadly, this is what it takes to resist, the corner we’ve been pushed into gets smaller and smaller, leaving us no choice but to put our lives on the line for our freedoms.

And to conclude, with all the attention given the above ground issues as they relate to the ranch, cattle, grazing fees, the desert tortoise, etc., I wonder what the ramifications are BELOW ground. Could mineral rights, water rights and oil fields be involved? What about underground bases? Area 51 is nearby as is Dulce and Los Alamitos. Is there more to it than just Harry Reid’s corruption and greed and Chinese solar panels and unpaid grazing fees?