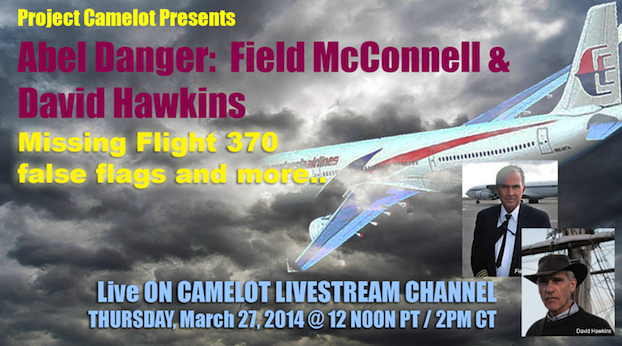 UPDATED:  THIS BROACAST IS NOW COMPLETE AND AVAILABLE TO VIEW ON YOUTUBE:

This was originally broadcast live on Camelot Livestream Channel.  An interview with Abel Danger:  Field McConnell and David Hawkins re FLIGHT 370 AND FALSE FLAGS…

NOTE:  Due to interference we were unable to maintain contact online with David Hawkins via skype and so will be doing another interview with him next week.  This interview is mainly with Field McConnell.

This was a FREE EVENT but we do need and appreciate DONATIONS to keep us afloat and able to continue this work!

GO HERE TO VIEW on Livestream or view above on youtube :  livestream.com/projectcamelotlive/

PREP / info to assist you beforehand:

David or I or both are articulate regarding the 5 false flags including Aurora, Cudahy, Sandy Hook, Boston and the one we BLOCKED in Atlanta Georgia set for 4 July, 2013 at the PEACH TREE ROAD RACE. [ google:  peachtree + 4 july + cooked goose + atlanta burns ]

Our exposure of that event is what caused Janet Napolitano to depart DHS and caused Reuben Bradford to exit as Police Commissioner in Connecticut [ google: malloy + dmort V + hseep + crisis actors + vision box ]

Regarding videos suggest this 6 minute video is what stirred up the interest in Malaysia, China, Indonesia, Pakistan, and India:

This video shows me performing at an airshow what is the lowest jet to jet air refueling ever performed.  Not a boasting point but rather an indication of willingness and committment.  The aircraft installed at Canton TX [ vzcm.org ] is tail number 64-0965 and was in my unit from 1977-1990 and later was used by Airbus-EADS-Serco in drone to drone airrefueling.  Lots of pictures by googling [ field mcconnell’s jet + images ]

If David can do one or two hours, great, but I will be there with our without David.  The Truth is coming and Boeing and Malaysia will like it but Serco and ALPA may well not.  Keep in mind I exposed the illegal modifications to Boeings on 10 December, 2006.  To see my letter to ALPA, Northwest, FAA, FBI, NTSB etc google this combo [  10 december 2006 + clear the skies captain mcconnell  ]

ALPA has been given a 30 day notice of my INTENT TO SUE.

The usps.com tracking number is 70111570000189992185 and I request that you post that as you will find your listeners enjoy watching the ‘real action’ live.  Judge Rosemary M. Collyer of Washington DC District Court was also advised with same tracking number except last four 2185.  It is my contention that ALPA perpetrated a FRAUD UPON THE COURT and that will be proven with two single sentences.

In the interest of fairness to those I accuse I have copied ALPA, FAA and NTSB as well as DHS.