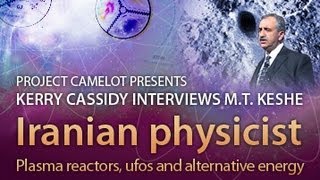 This is a live interview originally broadcast on Livestream with MT Keshe regarding his bold statements at the beginning of 2014 and discussing his and his team’s effort to work with Tepco and the Japanese to clean up the radiation from Fukushima using his advanced technology.

We were joined by Physicist, Richard Alan Miller, Matthew Stein, author of When Technology Fails, and Mike Harris, talk show host with a background in science working for Motorola…This covers key elements of Keshe’s approach and his team effort to work with the Japanese and Tepco to clean up the radiation from this near Extinction Level Event.

...”By the end of December we will make sure, that there are no grounds for disruption for space travels on regular bases from all the nations on this planet that all shall harvest the reaches of the universe collectively and equally.Those who have doubts about our work, be ready to become soldiers of the peace and unity before the end of this year.”
Keshe goes on to list how he and his foundation will end world hunger, provide clean water, free energy and his first order of business will be to repair the destruction created by the Fukushima disaster.  This is a major statement of intent and no doubt a casting down of the guantlet to challenge the NWO that their rule has ended.  I encourage you to watch my previous interviews with this fascinating scientist and courageous man.

Note:  We need both of these important interviews transcribed asap.  Please contact me if you are able to do so:  kerry@projectcamelot.tv    Put the words “KESHE transcription” in the subject line.

GO HERE FOR THE MOST RECENT INTERVIEW WITH KESHE:  DECEMBER 7, 2012