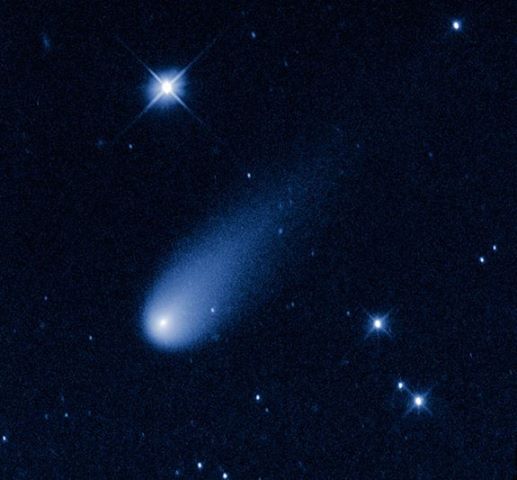 According to more than one source, Comet Ison is actually a group of craft… coined an “interstellar armada” by one party, a phrase I think nails it nicely.  In Gordon Duff’s recent article entitled, WHAT CAN BE TOLD, he alludes to ISON and a number of what he calls “big rocks” headed our way.

According to Duff there is a temporary alliance taking place between normally antagonistic governments on Earth to meet this new challenge ie. rocks that are headed directly toward us to prevent an impending collision using “nukes” and other hopefully more advanced methods. Note:  whether the so-called big rocks or asteroids are headed here as part of the “Armada” or whether they are being steered here (like billiard balls) and can therefore be redirected away or in a more sinister scenario, they are being in essence “shot” in our direction is not clear.

Either way, according to my source, we, that is, the secret space program and more conventional global space/military is attempting to deal with this impending threat.

For some reason, in a seemingly unrelated statement, not explained by Gordon, both stated as a reality yet denied at the same time in order presumably to disavow himself of any disclosure of classified data, Gordan writes:

Now one would have to ask, why this circuitous statement follows comments about ISON and the Big Rocks headed this way.

On that note I have been told by more than one source that ever since the Gulf Oil Spill (that was not per se an oil spill so much as a cover event for a much more diabolical event having to do with Black Nano Self Aware Oil-like substance becoming activated within fissures of the sea bed–see the Falklands War/Death of 25 Marconi scientists and the Project Camelot roundtable and radio show interview with David Griffin for more info on this)… At any rate, the northern Gulf Stream was interrupted by these goings on and the result was it has virtually stopped (also see many Dr. Bill Deagle radio shows on this from a year or two ago)… Apparently the U.S. and Europe are fighting over directing this Gulf Stream so that one or the other doesn’t end up with what could be termed a mini-ice age.  The word is that the nuke in other words mentioned by Gordon above would have been part of the project to restart the Stream and redirect it… to favor the Northern U.S. vs. Europe.  However, my source states what they are really working on is restarting the whole thing so neither sides of the globe suffer any such drastic cooling.

But none of the above explains why this information follows the ISON disclosure.  Other than as a possible part of what appears to be a sort of laundry list of relevant crucial information Gordon is tasked with releasing to the public.

“….keeping damaging and insane speculation out of the press has led to a restructuring of our military, shutting down NASA and some of the FEMA activities..”–Gordon Duff, Veterans Today

Now why would an effort to shut down any info inadvertantly going to the Press, be the reason for “restructuring of our military”??  Surely one doesn’t fire a number of generals simply because you can’t stop them from talking?  Presumably, one doesn’t reach the level of general by not following orders.  So given this statement, we learn that they are “restructuring our military”… and interesting exercise which raises a number of questions such as who are “they” and why all of a sudden is there a need to “restructure” the U.S. military.  What is the real reason for the recent firing of generals and need to suddenly restructure.  Note:  if you do a google search you will see that there have been for the past 2 years a number of purges of generals and other military by the Obama White House.

Speculation ranges from likely potential coups to cover ups of operations such as Benghazi… Not being on board with the administrations playbook can certainly be detrimental to the job outlook for any general no doubt.  But seriously, what is going on here?  Does the government really shut down NASA and suspend FEMA projects simply because of potential press leaks?  Doubtful.

Or is it simply that Gordon got carried away and didn’t write the sentence very well perhaps because his information at that point was tapped out or inadmissable to the public? Whatever. The point here is that we get the gist… being that the MILITARY is being RESTRUCTURED… and again coming as part of the release of info surrounding the incoming threat from BIG ROCKS and the INTERSTELLAR ARMADA headed this way one would be inclined to put two and two together and get… That the incoming Armada is NOT a friendly one, and that they may be shooting some volleys our way to:

1.  Test our resolve (aka our defense capability) to see in advance what they are dealing with 🙂

2.  To put us on alert that they uh, mean business and are taking charge.

3.  To wreak havoc on Earth in order to smoothly sail into port or sail by.

4.  To cause a distraction while they conduct their meetings/operations in the meantime.

6.  None of the above, and they are simply ‘big rocks” headed our way as part of the debris field we are entering and/or they were recently displaced by the super wave and suddenly propelled in our direction.

And so on.  Worth contemplating and investigating.

Why Gordon would “lock himself up” if he actually told the real truth is tantalizing in the truly dire nature of what such a statement portends especially after the disclosure that is made beyond that.  Presumably, the state of the incoming armada is rather more diabolical, than even he permits himself to hint…. More food for thought.

What I find amusing (albeit in a twisted sort of way) is how the new agers on the web refer to the “Armada” as benevolent and coming to make contact in the friendliest of ways.

So which is it?  Something so sinister and diabolical that we can only imagine ala BATTLESTAR GALACTICA?  Or friendly furry little space aliens or handsome blond nordic looking space brothers and sisters coming to greet us and welcome us into the galactic family?

Seriously.  It’s a great time to be alive.