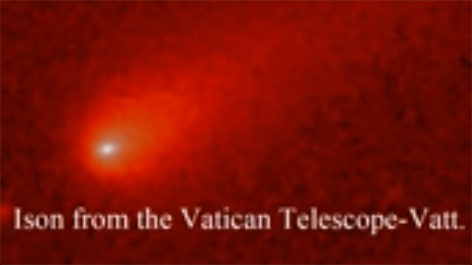 …”Works of importance, such as your broadcasts, deserve far greater
recognition in today’s ever-changing world of so much information
being swept under the rug. One instance, which comes to mind, is that of the “pole shift” that people do not realize has ‘sped up’, the Arctic Sea Summer thaw ‘total melt’ for the first time ever ‘this Summer ( 2013 )’, the emerging event horizon of Comet ISON and its seven ( 7 ) orbiting bodies around its three ( 3 ) primaries plus its ‘debris field’ and ‘impact effects coming to our Sun’ and solar flare activity increases the U.S. government is already so concerned about, plus the planned U.S. electrical grid shutdown test coming very soon and FEMA Region 3 emergency requests by October 1, 2013 plus other activities with similar end-dates.

As for the other items ( below ), I am unable to focus on those at the current time because of pending urgent other issues coming around the corner sooner than many may be aware-of.”–Unwanted Publicity Guy