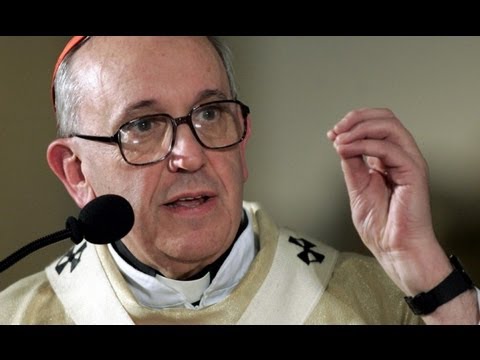 The Corbett Report –  Michel Chussudovsky on Pope Francis… his prior life as the highest ranking Jesuit in Argentina.

Is this just another ‘good Nazi’ who has paid his dues oppressing the populace in Argentina and now being rewarded with a reign as Pope?

It is widely known that there is a very large contingent of Nazi’s from Project Paperclip and the ‘fall’ of Germany that settled in Argentina.  And there is a great deal of testimony about a large underground base in Argentina as well.

The recent Mike Harris show with Gordon Duff as guest spilling the beans on a supposed “deal” with an off-planet race of humanoids that are said to come from Alpha Centari and are headed here (nearly a billion I am told by a separate source)…  Go to the Rense archives for today’s radio show hosted by Mike Harris.  Must listen.  LINK NOW ADDED:

While I haven’t heard it yet, I have heard things about what info it contains such as:

These visitors apparently look remarkably like the ideal Nazi.. big. light haired (some say even albino in coloring) muscular and so on… The story goes, they are in need of a large amount of real estate to settle their people on, having lost a war with some unfriendlies on not just one of their planets but two!

This is the tale that a contingent of MJ12/psion or whatever name they go by now-adays is spinning.  What they are saying is that the secret government has made a deal to bring this group here in exchange for technology (big surprise) and another planet (or planets) where the human race is said to be given rights to terraform and move their own to in the event our Earth cannot sustain us… or them.

They are planning to give them, pause for effect, Africa!  A whole continent. And governments worldwide know this and have agreed.  I don’t think that will go over well with the current inhabitants.  Yes I know it sounds just like the movie District 9 and The Event.

In fact, I ran this by one of my whistleblowers and he agreed this has been in the works for some time.  Only, these supposed humanoid beings aren’t really humanoid…  They are of course reptilian and even a form of ‘praying mantis’ parading as human so as not to upset the locals.

And I am being told the ghost cities in Angola being built by the Chinese are supposed to be built to house their “caretakers” — that is, the Earth humans who will mind the place.

While, I am at it this same Duff-MJ12 contingent is claiming the recent asteroid over Russia was a craft full of yet another group of 12-14 inch beings with an extra apendage… in addition to 2 arms and 2 legs… And they are supposedly not ‘friendlies”….

Are they simply trotting this out to amaze and confuse?  Are their elements of truth mixed with disinfo?… Yes probably.  My whistleblower apparently communicated this scenario 3 years ago to a certain person (not me).  ie. From what I have heard, diabolical plans for the African continent by the secret government have long been hinted at but no scenario such as the one mentioned on the Mike Harris show on Rense with Gordon Duff was forthcoming…

Given scenarios such as these, it’s no wonder they needed a younger Naz/Jesuiti in the office of Pope.

Some think this Pope is planning to bring the worlds together and that he is working for the good of humanity.  Time will tell.

We are planning an upcoming Live video Roundtable to discuss all of the above with Richard C. Hoagland and others to be announced soon.  Depending on the state of our streaming capability…

More on this soon…Pope Francis, The Jesuit Connection and the Future of Everything… Roundtable discussion to be announced shortly.