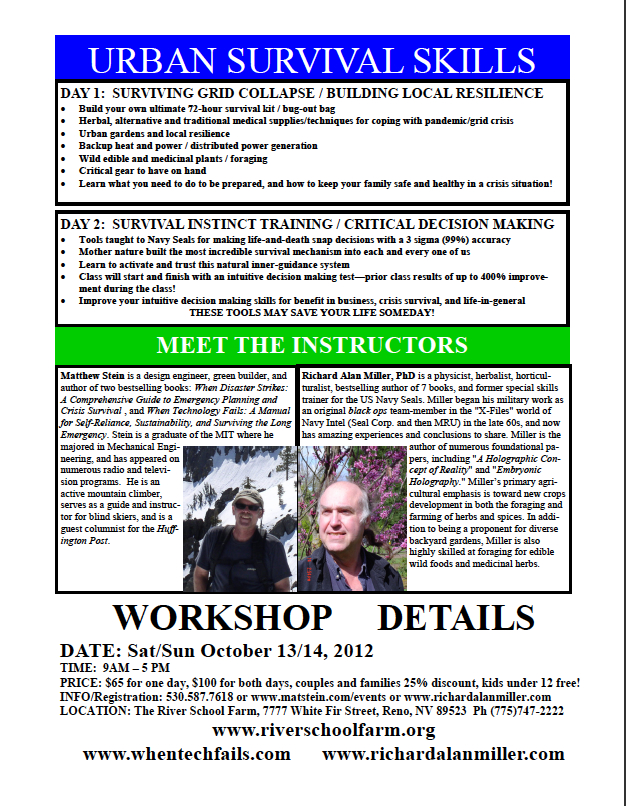 For those of you that listened to my radio show last Wednesday with Richard Alan Miller, (or if you missed it I highly recommend it)…Dr. Richard Alan Miller and Matthew Stein will be giving the following workshop this coming weekend in Reno. 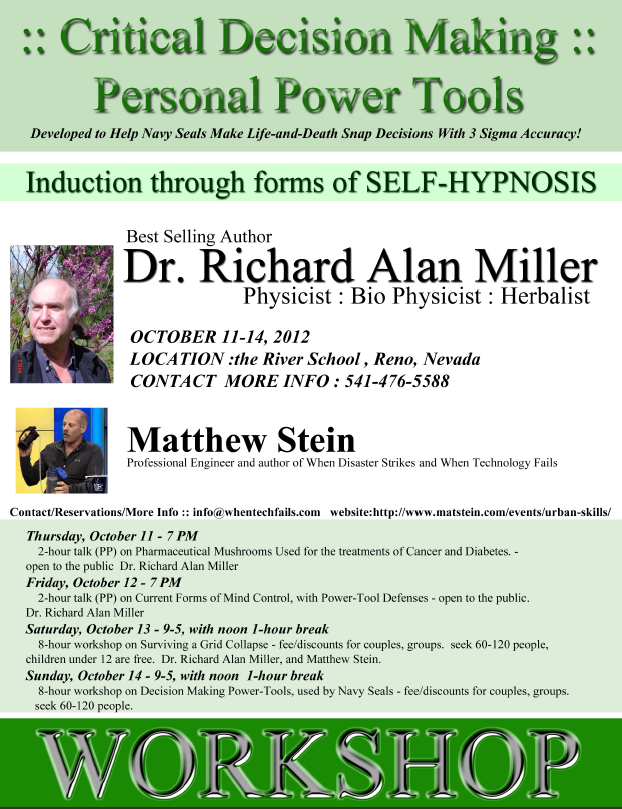 1.) Free lectures and book signings at the Reno Barnes & Noble from 7-9 PM on Thursday Oct 11. Matthew Stein’s talk will be on the subject of, “When Disaster Strikes: What You Need to Know, Do, and Have on Hand to Keep Your Family Safe in Times of Trouble.” Dr. Miller’s talk will be on the subject of, “Current Trends in Government Mind Control and How to Defend Yourself From Them.”

NOTE: Participants may attend either both days of this workshop, or individual days.

Note: Dr. Miller was one of three co-authors of the Anarchist Cookbook. Due to his top-secret clearance and former military involvement, his contribution as a co-author remained anonymous, but is verifiable. Additionally, Miller was the “real Mulder” of the X-Files, having written a treatment for Hollywood that was a bit complex and later adapted and simplified by the man who became the screenwriter for the X-Files. In the 1980’s he bailed from the world of Black-Ops and Navy Seals into the world of alternative agriculture, where he went on to become one of the world’s foremost experts on the commercial cultivation of herbs for supplements and medicines.

In the words of Dr. Miller:”Regarding my back ground = old man DuPont had a “bulls-eye” on me when I was in high school.  They orchestrated my entire education, and then were waiting for me when I got out of graduate school.When I worked at Boeing, they first had me develop protocols for Seal Corp. (to make frogmen into supermen).  From there, I moved up into Navy Intel (working directly with Dr. Carl Schleicher MRU) in Anesthesiology… When I “woke up” and realized what I was doing (mind control, drug studies, and chip implants), I left the military and became a farmer (35 years).  I now network rural communities and bunkers for congressmen. Some now call me “The Postman” (eideric memory).  Mat Stein is helping me offer “survival skills,” what I developed for use with Navy Seals.  Duncan Roads (Nexus magazine) calls me the oldest living MIB – that is what I did.”