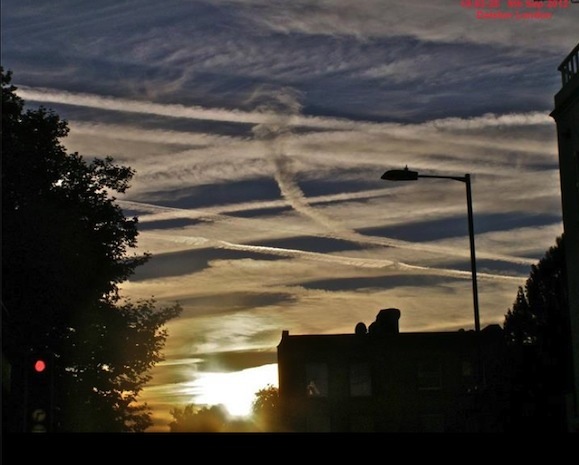 Just got off a plane a few hours ago.  Jet lagged yet talking with Mark McClandlish, aviation illustrator–world renowned about Chemtrails and the real purpose and SCIENCE behind them this morning on the Paul Richard Price show on Revolution Radio.

This was a very informative and fascinating discussion.  A must listen for those who want to consider some aspects of this whole chemtrail operation from the pov of the secret space program and mind control angle.

Mark McClandish is a long time favorite of Camelot having communicated with us years ago about the background behind what makes UFOs go…. both from the technical aspect of zero point to the design characteristics of certain way above top secret craft that the secret space program has in its arsenal.

We were also discussing the massive Chemtrails seen over London just after the CAMELOT Awake & Aware Europe presentation at Passing Clouds club on the East End Saturday night. The place was so packed there was no room for another body in the space!  This was a venue that allowed for around 90 people at an event where Kerry Cassidy and Sean David Morton arranged to speak with barely a week’s notice going out.

Clearly Londoners are very tuned in to the subjects we are covering.  Had we more time and a larger venue it would have been great to see what kind of numbers we could attract to get into one place and time focusing on these issues.

As the event ended around 6pm everyone hit the streets and began seeing a massive very overt Chemtrail spraying over their heads.  Planes in plain site criss crossing the skies in a way so overt and not seen with such abandon previously according to these awake and aware Londoners.  So what’s up?  What are they preparing for?

PHOTO from A… thanks!   Apparently, according to Bob from Manchester a similar thing was happening there on Sunday morning.