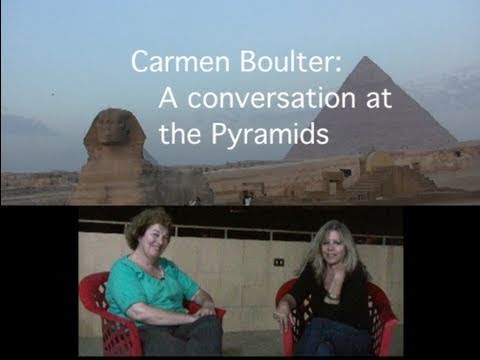 Carmen Boulter | A Conversation at the Pyramids

I traveled with Dr. Carmen Boulter on her group tour of Egypt for the special meditation inside the Great Pyramid and at the foot of the Sphinx on 10-10-2010. This interview was done in view of the pyramids where at the end of the tour we had a chance to sit down and talk about Amarna, Nefertiti and Akhenaten and what really happened in those days. Detaching themselves from the intrigues and treachery of temple life, they moved to Amarna built temples and their palace and established a new religion which was focused on the one god. This was a time of peace and as depicted in the temple inscriptions and carvings of the period, a more natural mode of being. The reign of Akhenaten lasted for 17 years… and ended with the death of Akhenaten. When his heir and son, Tutankhamun was moved back to Luxor, the temple priests managed to reestablish the old ways of polytheism and hierarchy.

Our conversation deals with Carmen’s considerable past life recall from the period of Amarna, what really happened during the reign of Akhenaten and Nefertiti, the general state of Egyptology, and 2012. Carmen’s phenomenal recall and understanding of the true history of Egypt and her erudition augmented by years of study is inspiring. While our journey in Egypt was heavily impacted by personal tragedies and high emotions the discoveries and revelation of seeing Egypt with Carmen as guide was a rare and very special experience.

This was my third trip to Egypt. While I was there, I had several intense visions and teleportations (sense of being transported to the time). In one particularly clear realistic experience I found myself in a temple watching a scene as if in a movie, where I was seated among the royal family and watched as Nefertiti was pacing up and down and some kind of discussion was taking place. This experience was so real that when I awoke I was certain I had actually been there and that in the true nature of time it appeared to be happening in the ‘now’. Later, during a meditation with 2 others I got the message that there was a desire for this time in history that has been hidden from view to be restored to its rightful place and that the spirit of peace and unity be remembered and live again.