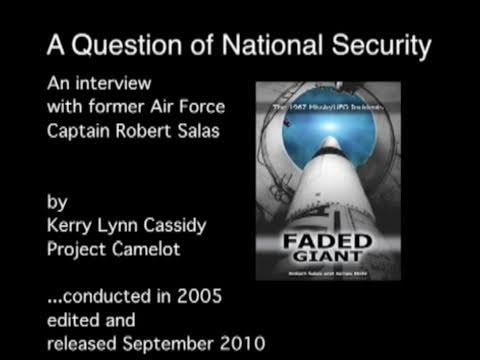 I interviewed former Air Force Captain Robert Salas back in 2005 before we created Project Camelot. Back then, I was just starting out conducting interviews for a documentary I planned to make. As it happened, shortly after this interview I met Bill Ryan and we became involved in the journey that became Project Camelot and for the past 4 years I have not had the time to go back and revisit various projects that were filmed and never edited. Each new Camelot interview came fast and furious and we could barely keep up with the work. I wish, at this time, to formally apologize to Robert Salas for the delay in getting this interview out to the public where it belongs.

Upon hearing about the Press Conference recently held at the National Press Club in Washington, D.C. I was motivated to go back and recover this footage in an effort to substantiate and further assist this effort to get the word out about UFOs and National Security at this critical time. Times they are ‘a changin’ and we are at a juncture when the reality of ufos and the fact that we are not alone, have never been alone (as Bob Dean would say) will become the new paradigm. Project Camelot has diligently worked toward this end and to putting an end to secrecy across the board.

With this release I pay tribute to Robert Salas and the brave men and women who have put themselves on the line both before the public and behind the scenes to break down the wall of secrecy that divides us here on planet Earth from the truth of our Galactic citizenship and the multi-verses of which we are all a part.