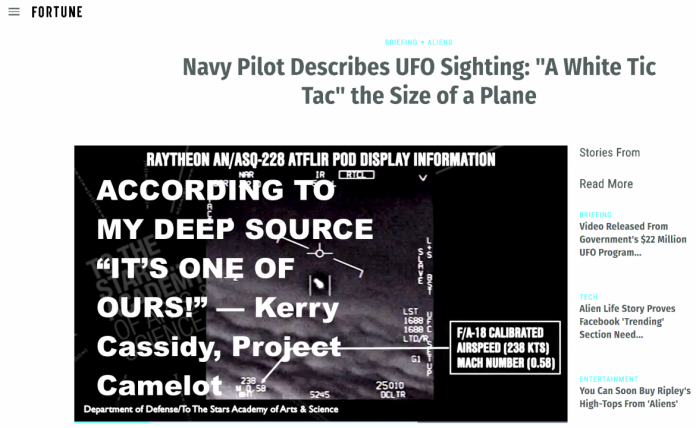 Word I have is that the TicTac sighting of craft plastered all over the news media are actually “ours” meaning belonging to the Secret Space Program run by the U.S. and others. So it looks like they are only revealing OUR TECH in a 13 year old story that they decided to release recently (in Oct-Dec 2017) which then was picked up by nearly all mainstream American media. And yes, we know that they reversed engineered some if not all of the tech to build those craft from ETs.. See my William Tompkins interview for more on this.
However, DeLonge and Team and specifically Luis Elizondo, FMR Director of Programs to Investigate Unidentified Aerial Threats, USG (CIA) and Chris Mellon, FMR Deputy Asst Secretary of Defense for Intelligence, are misleading the public into thinking that this TicTac sighting is of a “UFO” or for the unenlightened “unidentified flying object” or to use their words “aerial threat”…. This is not true since it is actually built by us (a fleet of such vehicles were actually seen) and instead, (according to my source) it is a disclosure meant as a covert threat aimed to notify the Chinese of what kind of tech we have (dated back 13 years) and a way of owning the DISCLOSURE NARRATIVE! This means that DELONGE AND TEAM are already coming forward with falsified data… You can bet that Steve Justice, FMR Advanced Systems Director for Lockheed Martin’s “Skunk Works” knows damn well whose craft those are and who built them. COME ON GUYS you can do better than this! According to my deep source this latest attempt to bring real disclosure about our SECRET SPACE PROGRAM in operation since the 1930’s is our “SSP” showing off their tech and as such is misleading. If my deep source is correct, and I have full confidence in my source, then these guys (all members of Delonge’s Team) know full well what the craft is and should be ashamed for lying to the American public.
Chris Mellon, is the FMR Deputy Asst Secretary of Defense for Intelligence (who describes an event in a Live Broadcast now on youtube, where a UFO buzzed the supercarrier USS Nimitz and was photographed, tracked by radar observed by several F-18 pilots and other Navy servicemen).
Jim Semivan, is FMR Sr. Intelligence Service, CIA’s Directorate of Operations
Dr. Hal Puthoff, Director of DOD/CIA/DIA Scientific Research Programs (one of the Aviary also known as “the Godfather” in some circles)
Steve Justice, FMR Advanced Systems Director for Lockheed Martin’s “Skunk Works”
Luis Elizondo, FMR Director of Programs to Investigate Unidentified Aerial Threats, USG (CIA)
Nimitz footage of craft:
www.youtube.com/watch?v=x8T6PgYrAYI
Get a grip and try telling the truth for once.
fortune.com/2017/12/19/navy-ufo-stories/
Quick Summary:  Commander David Gave Row was interviewed recently on Fox News …Why 13 years LATER are they releasing this carefully vetted story now? Turns out the sighted craft (a fleet not just one) belong to US according my deep source!!
www.youtube.com/watch?v=EDj9ZZQY2kA
We can possibly understand that Commander Row was not “read-in” on the true nature of where this craft or crafts originated from (our Secret Space Program) back in 2004 but one wonders if by NOW he actually knows the truth and is under orders to play his role and act dumb.  However, as one wise acting coach once told me, “never play dumber than you are.”– KERRY CASSIDY, PROJECT CAMELOT
MORE RELATED LINKS:
COAST-TO-COAST AM SHOW : host, George Knapp with Jeremy Corbell
www.coasttocoastam.com/shows/2017/10/22
JOHN LEAR INTERVIEWED BY GRANT CAMERON:
www.youtube.com/watch?v=4gwEBTNTnCM

..”The New York Times reported most of the money went to a space research company run by the billionaire Robert Bigelow, who is convinced that aliens exist.” (link below)

SPECIAL NOTE:  TONIGHT I will interview pilot, John Lear about this story at 7pm PT
youtu.be/8WT4u_Snmto