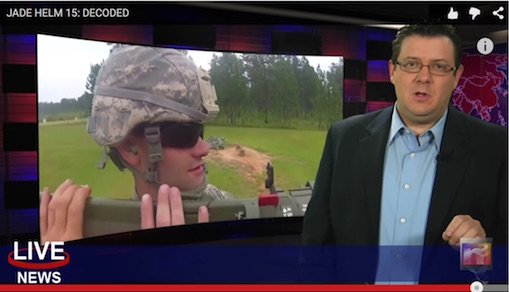 Many questions come to mind while watching this report from Gary Franchi on Jade Helm 15 being deployed across America.  This report is mainly concentrated around Texas but the issues pertain to all locations where “exercises” may be taking place.

This report was published in April 2015…

It is significant that the Jade Helm rep in this video clearly states that the weapons the soldiers will carry will be “unloaded”.   He also states all Jade Helm participants will wear an “armband”.  Does that include the soldier (Navy Seal?) who reported a coming EMP several weeks ago while he was supposedly going AWOL?  Because since he was not wearing an armband, yet the EMP never happened.  What are we to assume about him?  Was he given wrong information as part of a psyop?  Was he in on it?  Was he legitimately on the run?  If he was legitimately on the run and he was not part of a military psyop then we would like to hear from him!

See my previous reports on the Navy Seal who went Awol from Jade Helm: