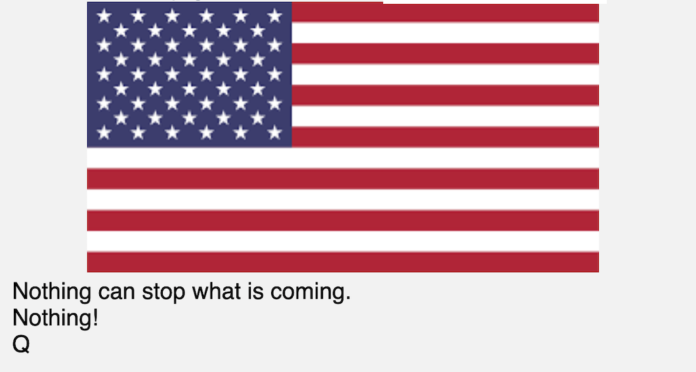 THE FOLLOWING OVERVIEWS OF THE SITUATION AS EXPECTED TO ROLL-OUT OVER THE NEXT FEW WEEKS ARE MAKING THE ROUNDS.  ACTUAL AUTHORS NOT KNOWN update:  Some of this info has been leaked from the Trump team!

…”The 2020 Winter Solstice occurs on Monday, December 21st, shifting us into The Great Awakening.

Attorney General Barr’s last day on the job is Wednesday, the 23rd of December.   The next day, Thursday, is also known as Thor’s Day.  Drop the hammer on Christmas Eve.  Remember Milania Trump’s tweet of a Christmas card with Santa holding a hammer with a Q at the bottom of the card.  The same picture was dropped by Q (2598) back in December of 2018.
Christmas Day, Friday the 25th, look to see President Trump delivering a Christmas speech beginning with the words, “My fellow Americans…The storm is upon us.”
DNI (Director National Intelligence) report was set to be released on 12/18/20, but was strategically delayed to be released and de-classified immediately before or during the new 2021 Congress of Delegation:  January 3rd – January 6th.
New Congress sworn in 1/3/2021. Congress of Delegation votes on January 6th.   Election formally contested as legally required by 1 Senator and by 1 Member of the House.
The DNI report will be de-classified before the Congress of Delegation meets, and it will show conclusively that China, Iran, Venezuela and others used Dominion to steal the Election.
At that point, certifying the Election for Biden would be treason.  They go into deliberation and conference for c. 2-hrs.  They emerge from deliberation and conference to certify President Donald J. Trump as the winner of the 2020 Presidential Election.
At this point, the deep state new world order cabal initiate their violent coup uprising with  BLM, Antifa as well as their Chinese and other foreign assets on both coasts of the US and in Canada and in Mexico.  Our military is already ready and waiting for all of them.
Immediately, President Trump declares Martial Law through the Insurrection Act via his Executive Order 13848 of 9/12/2018 (“Executive Order on Imposing Certain Sanctions in the Event of Foreign Interference in a United States Election”).
The internet, TV and radio all go down.  Black-out for 10 days.  The riots are squashed and massive arrests follow, including governors, attorneys general, mayors, representatives and media moles, CIA, FBI, DOJ, HLS and many other traitors.  Thousands of sealed indictments are un-sealed.  Military-style tribunals commence.
The global corporate American democracy comes to an end.  And The United States of America returns to being a Constitutional Republic.  God bless the USA✨🇺🇸💕
POST TWO:
…”Right now Trump is sitting on a stack of Trump cards or maybe Uno Wild Draw 4 (more years) that he just waiting to lay down like a fricking royal flush.
-He has court cases still pending that will go to the Supreme Court & thanks to TX case he now know how to file it under article 3 not 2 that will force them to hear it.
-He has the DNI report on Friday.
-Barr steps down 23rd (can now be a witness—he did his job).
-Durham is a special counsel (can prosecute in any state).
-He’s letting civil, criminal, federal courts fail to handle the situation properly so he can use military tribunals.
-He has the data (all of it) from NSA, the Kraken supercomputer, the Alice supercomputer, (probably a couple others we haven’t heard about yet, too).
-He has the dueling electors from 7 states legislatures. He has VP Pence as final arbiter of which ballots to accept.
-He has the insurrection act. The NDAA, the national emergency, the 14th amendment, the 2018 executive order, the 2017 very first EO, the Patriot Act, the FISA warrants, the Declassification of everything, people swear affidavits by the 1000, the QR code scan guy who just needs access to some real ballots & he can detect if they are fake by looking for creases & printing items using his scanner technology, he has all the statistical data being analyzed, the videos, emails, phone calls, bank transfer statements showing the coordination of the coup, he has RICO, he has the crimes against humanity videos, Wikileaks just dropped a ton & Assange will be pardoned so he can talk about Seth Rich.
-Now that the governors and secretary of states certified & Biden accepted, they committed and knowingly agreed to treason.
-Solar Winds just raided & Dominion closing up shop. Same with politicians & media.
-He has the C_A servers used to change dominion machines, he will soon have access to the machines too. He baited them to staying in DC so they can be inaugurated, oops arrested.
-Biden hasn’t accepted any transition money nor has Kamala given up her seat.
-The military has infiltrated Antifa & BLM & he has the financials.
-He knows which politicians took Chinese & Soros money.
-He put in Miller & Watnick. He also just reduced dumb regulations.
-And wrote an EO in the military line of succession.
-He is defunding the C_A.
-He just replaced Kissinger & Allbright on the National Security Advisory Board with his loyalists.
T-he military has been flying more planes over America. The navy just parked huge fleets on both coasts. The 82nd is preparing for an operation (same group of Flynn & Donoghue).
Things are falling into place. He has it all. He is just laying out the case, building the narrative. He knows he won & they cheated. He gave them the chance to fix things. They chose not to. Now they all go down.”
– From a Trump FB Group

Here you go, please read and pass it on…..

These are Clinton’s emails: