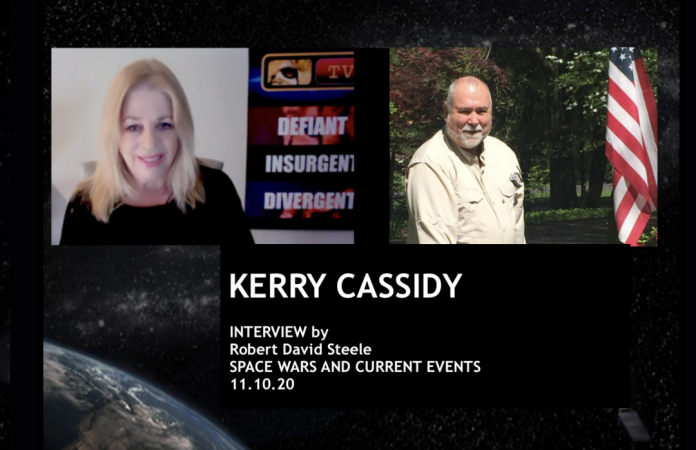 This is a short interview by former CIA Officer, Robert David Steele with Kerry Cassidy that contains an overview of the space wars, secret space program, election and current events.

Bio from Robert’s site:  Robert David Steele is the pro bono Chief Enabling Officer (CeO) of Earth Intelligence Network, a 501c3 devoted to teaching holistic analytics (HA), true cost economics (TCE), and open source everything engineering (OSEE) and now also CeO of Open Source Everything (OSE Inc.), a for-profit that seeks to help all countries create a prosperous world at peace, a world that works for 100% of humanity, at 10-20% of the cost of the failed Western economic model. AUTHOR:  Many books on intelligence reform – two with Forewords by past Chairmen of the Senate Select Committee on Intelligence, two on electoral reform, two on false flag Deep State threat, one on national security reform, one on engineering reform, multiple Kindle Shorts as well as articles, chapters, lectures, monographs, online posts, and testimony. His work is informed by being a top reviewer for non-fiction, respecting the work of other authors, publishing over 2,000 reviews in 97 categories of non-fiction reading plus fiction as truth, the 98th category.