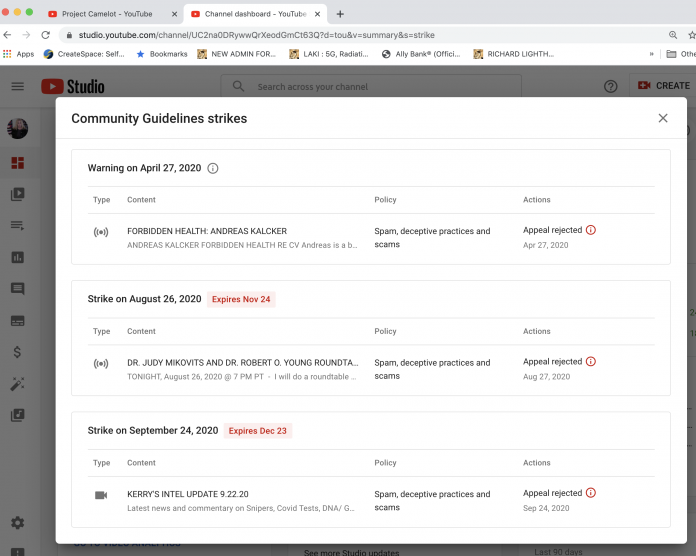 My YOUTUBE CHANNEL is in danger of being taken down by Youtube.  At this time I have 2 strikes against my main youtube channel.  Both strikes are violations of my right to free speech and freedom of the press since I am an investigative journalist and broadcaster/show host with a large following and countless testimonies from viewers with regard to my high integrity and professionalism.

As an investigative journalist, if I am unable to report information obtained from my investigations to the public via my channel I am not able to pursue my right to press freedom.  I have been given two strikes within the past 2 month period.

Currently I have over 900 video interviews on my main Youtube Channel PROJECT CAMELOT, over 282,000 subscribers and over 69 million unique viewers.  I am a Youtube “Director” and “Partner” and have had my youtube channel since 2006.  If this channel is taken down because Youtube decides arbitrarily to again violate my right to free speech and freedom of the press it will be a considerable blow to my ability to make a living.  The reason for this is that although I have over 282,000 subscribers and over 69 million unique viewers I am only able to communicate with those viewers via my channel.  In other words Youtube “owns” the listing of email addresses of my viewers and therefore only they have the ability to notify my viewers if my channel goes live or is removed. 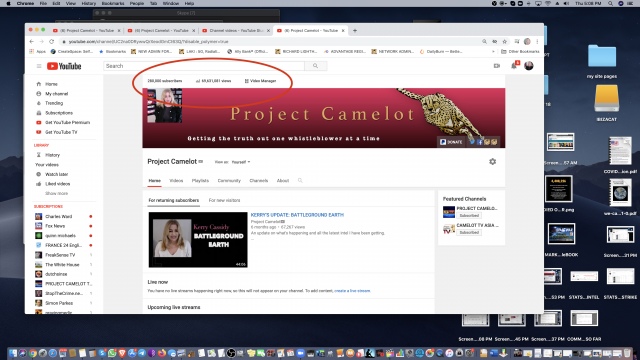 The nature of how Youtube became the centralized platform for most broadcasters is lodged in the capitalistic private enterprise model which allows tech companies that are first to market with a superior product or a product that becomes a standard because of its users to dominate the marketplace.  This is because of the nature of the need and desire for people around the world to be able to communicate with each other using ONE CENTRAL PLATFORM which facilitates EASE OF USE AND makes possible this global reach.

This is the case with several such platforms where unfortunately violations of free speech and freedom of the press of users is becoming rampant.  Such platforms as Twitter, Facebook and Linkedin in addition to Youtube have become INDUSTRY STANDARDS because of the aggregation of users, the capability of their platforms to operate smoothly with huge volumes of traffic and bandwidth and provide their services for free which lowers the bar to the user in obvious ways.  The way in which those tech firms make money off the users in other ways makes their business models most advantageous and as a result they have obtained positions of power and the ability to sway public opinion and access for peoples worldwide.

With power comes the abuse of power and these firms are no different than despots and dictators who have risen to the top of the triangle throughout the ages.

So what we have is an abuse of power.  Using the mainstream press and organizations such as the CDC and World Health Organization Youtube and corrupt politicians, doctors and administrators they have become dictators within what used to be countries that used to claim to be democratic and dedicated to preserving the rights of the people to life, liberty and the pursuit of happiness as well as in the case of America such elusive rights to freedom of speech, assembly and freedom of the press.  In short these tech companies because of their market share have come to dominate the COMMUNICATION LANDSCAPE of the world of the internet and consequently been able to dictate against our rights clearly stated for and died for in our constitution.

In light of my current precarious situation I would like to let everyone know that I am seeking legal representation to take Youtube to court over what I believe is grounds for a CLASS ACTION CASE for violation of freedom of speech, freedom of the press and monopoly.  If you know of any law firm or lawyer willing to pursue this matter please contact me:   kerry@projectcamelot.tv

It is worth noting that since the so-called strikes against my channel (and specific shows) are based on vague “community guidelines” that are a matter of opinion (Youtube’s opinion) and can be shown to be prejudiced, politically motivated and based on an agenda which is contrary to the United States Constitution and Bill of Rights.  In fact the Youtube rule cited in the Youtube notice pictured here accuses me of “spam, deceptive practices and scams”!!  None of which is true and has nothing to do with the high level of journalistic quality of my broadcasts.

Therefore, should I choose to broadcast a show or upload a video going forward, to my channel I will be in great risk of receiving a critical, arbitrary and hence unpredictable ruling over which I have no control or recourse and at which time my entire over 15 years of work will simply disappear.

Yes I have copies, but at this time, I have found no platform that is able to support such a large library and I will likely lose contact with the majority of my audience.  As large companies know migrating large audiences from one platform to another is slow and haphazard and could likely result in greatly reduced viewership at least over a foreseeable future regardless of the method or means.

I know I am not the only broadcaster/journalist being threatened by Youtube in this way and so I am putting the call out to all others who have lost their Youtube Channels or are currently under threat to join me in making this a CLASS ACTION CASE.  I realize that even President Trump has been treated in this way by Twitter and has passed some legislation which one would think would create indictments against these companies but as far as I can see, no real action has taken place to stop these injustices.

SIDE NOTE:  I am currently being locked out of my Linkedin Channel where I also have a large following.  They state the reason as “suspicious activity” and said I had to submit proof of my identity and so I submitted my passport.  Supposedly this has been “under review” now for over 2 weeks.  I have received no correspondence or reason for the delay in granting me access to my account for over 2 weeks.