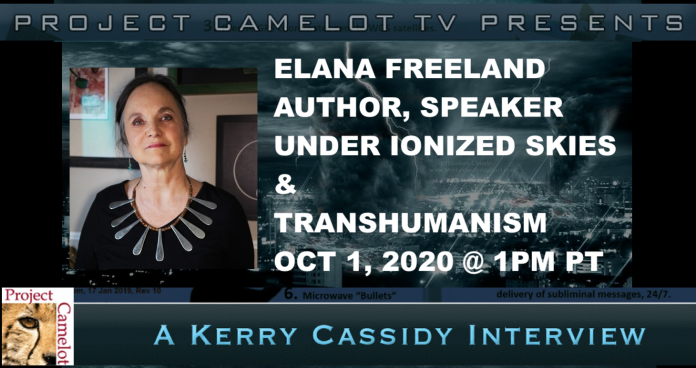 I interview Elana Freeland about her books and work regarding geoengineering, chemtrails and transhumanism.

Elana Freeland is a writer, ghostwriter, and lecturer who researches and writes on Deep State issues like geoengineering, MK-ULTRA, ritual abuse, targeting, and invasive electromagnetic weapons (Nexus, October 2014). She is best known for Chemtrails, HAARP, and the Full Spectrum Dominance of Planet Earth (Feral House, June 2014) and Under An Ionized Sky: From Chemtrails to Space Fence Lockdown (Feral House, February 2018), and is now finishing the third book in the series about how synthetic biology and Transhumanism are connected to the nanotechnology being delivered by geoengineering, GMO foods, and vaccinations. Under An Ionized Sky has been translated into Serbian and is recommended at a Technical University in Serbia, Nikola Tesla’s home nation, because, to date, it is the only book available to the public that explains how Tesla technology has been weaponized on a planetary scale.

Elana came of age in the eye of the Sixties maelstrom. Her 4-book fictional format series Sub Rosa America: A Deep State History exposes the hidden history of America since President John F. Kennedy’s televised assassination. In 2017, she wrote the story “What Would Solon Have Done?” for the book If I Were King: Advice for President Trump, edited by Harry Blazer with an Introduction by Catherine Austin Fitts.

Freeland’s undergraduate degree was in creative writing with a second major in biology. Her Master of Arts degree from St. John’s College in Santa Fe, New Mexico concentrated on historiography. She lives in Olympia, Washington.

Elana’s blogsite is elanafreeland.com and she maintains two private Facebook sites, one for geoengineering-related issues, the other for everything else: