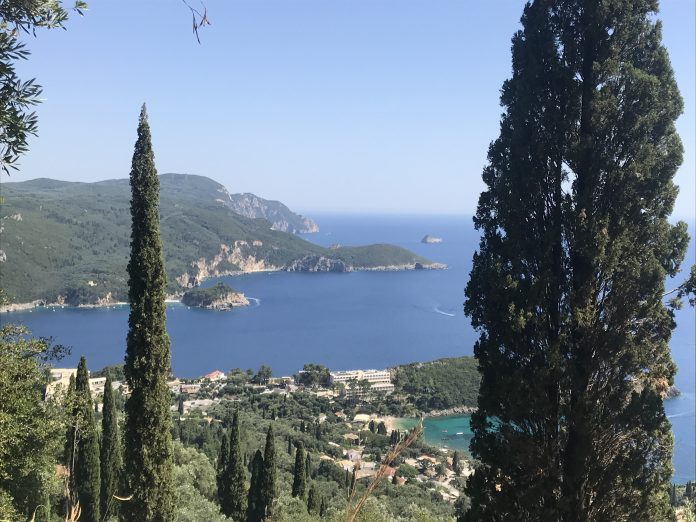 June 30th:  HELLO WORLD:  KERRY’S TRAVEL BLOG:  Made it to the UK …it’s a miracle!  They didn’t cancel our Corfu flight so far… so we are in the Holiday Inn Express at Luton (the ugliest most diabolical looking place)….

Terrible food but didn’t eat it brought my own

NO PROBLEM AT SECURITY was not even tested or no temp taken at LAX or UK!!!!!!!

So smooth I was amazed got in a TAXi and left the airport …no problem.

Apparently pubs are opening outdoor areas only so far….maybe more July 4th.. I don’t think you can sit in a restaurant here yet

Announcement over LOUD SPEAKER ABOUT NO NON-ESSENTIAL TRAVEL SO using scouting for doing a documentary as reason for travel.

Flight on British Airways best I’ve EVER had… flight attendants very Nice … I didn’t wear mask for most of the flight but of course all  the other lemmings did.

No issues on the plane other than it was a bit older plane than I remember….ON OUR WAY TO CORFU to scout locations for documentary on EMPRESS SISI … raised an an illuminati but rebelled and lived her life differently back in the late 1800’s and early 1900s…She was killed supposedly by a lone gunman type person…using a knife but indications are it was an illuminati hit…. Plan to write screenplay and do investigative report on this…

So far so good….hoping our flight to Corfu will make it tomorrow!!  Updated June 30th later that day:  Easyjet cancelled our Corfu flight… talk about last minute!  Now we and everyone are seeking refunds or rebooking to after July 15th (the new date for opening!!). Clearly the Greeks folded under Illluminati pressure in spite of their desperation for tourist money… I figure the Illuminati made them an offer they couldn’t refuse because if any country had a vested interest in removing the lockdowns in Europe it’s Greece!

So now stranded in UK… at my partner’s house which is a very decent place to be for now…trying to get another flight to Greece for after the 15th.

Will continue doing shows long distance in the next few weeks.

There is no doubt these lockdowns are arbitrary and all about population control and aimed at destroying economies.  How long heads of countries are going to continue to kiss the ass of the Illuminati-pedo-reptilian-draco rulers is anyone’s guess… Where have all the heroes gone…