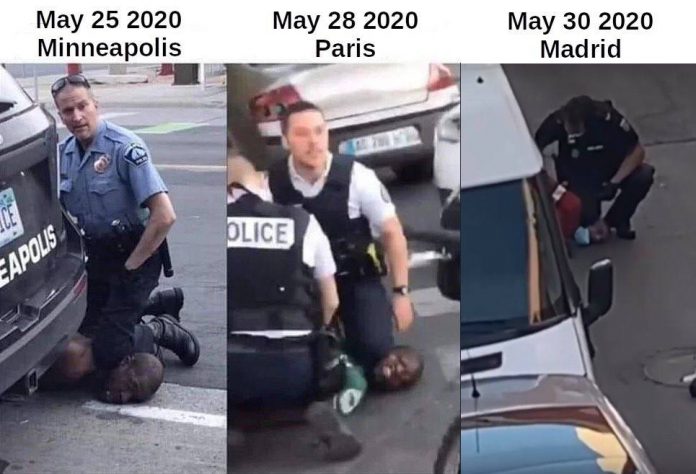 I think the real question that has to be asked is how fueling protests serves the Illuminati/Deep State agenda going forward. Because that is how they work.  None of this takes away from the cause of protests over police brutality… Black lives do Matter, All Lives Matter. But what is happening is setting the stage for something else.

CONSPIRACY:  When two or more people plot or conspire to do harm or mislead… = DEEP STATE

THIS ARTICLE FROM NATURAL NEWS HAS BEEN BANNED BY FACEBOOK

FALSE FLAG ALERT: Obama Foundation tweeted about George Floyd on May 17th, a week before his supposed murder – UPDATE

LOTS of puzzling Questions about the George Floyd Incident:

1.    Why does one photo from behind show the man on the road is not handcuffed and the video from the front that he is handcuffed?
2. Why is the cop car in the restaurant surveillance video different than the one Floyd was lying behind (different car numbers)?

3. Why were the cops in the surveillance footage that arrested him different than the police in the actual incident?
4. Why does the video show the diesel fuel price as 99 cents instead of the regular price in the area of $2.49?
5. Why does the Police Car have a non-Municipal license plate with “Police” on it?

6. Why does Derek have a completely different police badge on top of a second police badge matching his partner’s if they work for the same precinct?
7. Why is it not odd that both Officers Tou Thao and Derek Chauvin have both previously been investigated for excessive use of force and not charged by State AG Amy Klobuchar?
Additionally, Officer Derek Chauvin is married to his partner’s sister Kelli.
8. Is there any cop dumb enough to continue kneeling on someone’s neck for 8 minutes when surrounded by people and being video recorded?
9. Is it possible for the deceased’s cousins and fiancé to be completely tearless during interviews?
10. Why does the main cop have one hand in his pocket most of the time he’s kneeling?
11. Why did the kneeling officer appear completely cool and calm, as if he was posing for the camera?
12. Doesn’t it seem strange that Floyd and the officer that kneeled on his neck worked security together on the same shift at the El Nuevo Rodeo Club, the officer for 17 years (both were laid off because of the Covid Virus)?
13. Why do the neighbors of this officer say they didn’t know he was a cop and never saw him in uniform?
14. Why has the same attorney been hired as with all the other big supposed police killings of blacks? Attorney Benjamin Crump. The same attorney that worked on previous cases that resulted in busses bringing in rioters from outside the city?
15. Why does store surveillance video show Floyd calmly and submissively walking with the officer and not resisting arrest while the officer gently allowed him to sit down on the side walk, and multiple officers calmly chatting with him? Is this the kind of suspect that a police officer would feel the need to put on the ground and place his knee on his neck
16. Why did the EMT workers (wearing Police Uniforms including bullet proof vests) roughly handle and dump the unconscious George on the stretcher? This is not how trained emergency workers lift a person with a possible neck injury. Why did they not attempt triage or try CPR?
17. Can someone really not breath when someone kneels on his neck and is the victim really able to speak for considerable periods of time if he can’t breathe?
18. Post killing: Why is a white man that looks like an undercover (St Paul) cop in black and a riot gear mask carrying a black umbrella walking around breaking windows (and others dressed similarly starting fires) and instigating a riot? Is this reminiscent of “umbrella man” during the JFK shooting?
19. Why were almost all the rioters leading the destruction of the neighborhood at the beginning of the riots “white” and not from Minneapolis…

in a black neighborhood after a police killed a black man?
20. Why did the Chief of Police make it a point that those Inciting the Riots and Arsonists were not from Minnesota?
21. Why was a CNN News Crew not only detained but also Arrested?

Here are a few more:
1.  The first autopsy concluded he did not die of asphyxiation.  Then the family hired another coroner (the same one who lied to the public about Epstein dying) to do a second autopsy who then came to the conclusion they wanted that he died of asphyxia)?
2.  Why is George Floyd whose shoulders are massively larger than the cop poised for the camera not struggle when supposedly gasping for breath… He should have been thrashing around struggling for breath it’s an involuntary response….
3.  In order to breath, why didn’t the massive Floyd just flick the cop off his back by turning to the side?  He has the strength.
4.  Why did they have to hold him down at all if he was handcuffed?  Why didn’t they just let him stand…where was he gonna go?
5.  Why were cops with knees on necks shown in copycat incidents in Paris and Madrid and protests resulted. 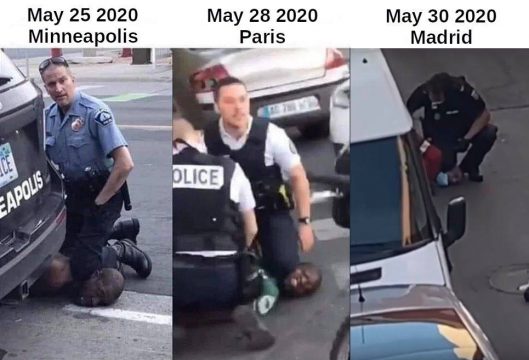