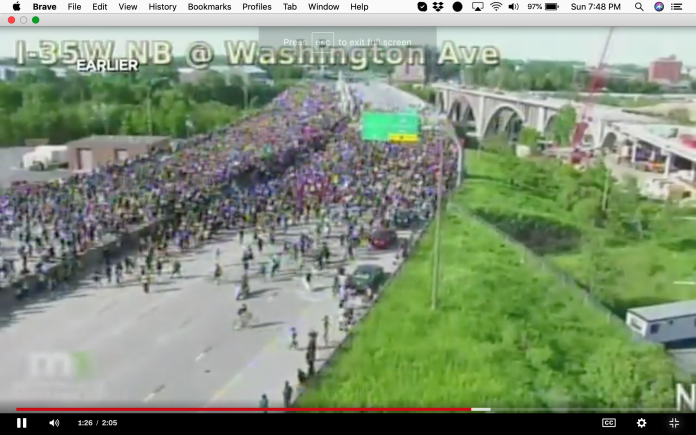 BLACK LIVES MATTER… ALL LIVES MATTER… This is being triggered and orchestrated to use the pent up frustration and anger of people of color to hit the streets… Yes some are demonstrating against racism and repression. But there is more going on here than that. This is being used because TRUMP AND Q and team wanted to roll-out martial law so Trump could dissolve the UNITED STATES CORPORATION AND RESTORE THE REPUBLIC… in order to do that he has to have martial law. But what the Illuminati using AI and mind control have done is trigger a people already frustrated from lack of work and being shut in their homes, oppressed and angry and turned it into a weapon against the TRUMP ADMINISTRATION. Now if Trump rolls out martial law he will look like a dictator…which is exactly what the dark side want. It’s also notable that jumping on police cars is not really a solution… or killing each other (what the PTB love to see) and destroying your own cities and property… just makes it worse. PEOPLE NEED TO STAND BACK AND RECOGNIZE HOW THEY ARE BEING USED. BLACK LEADERS NEED TO STEP UP AND REVEAL THE DEEPER MOTIVE BEHIND THE INSTIGATION OF THE PROTESTS… AND SPEAK TO THE PEOPLE.

It’s easy to see this was an Illuminati hit on Floyd strategically placed to trigger race riots which have nothing to do with what’s really happening…This is to stop Trump… this too was planned.  These riots seem very Mkultra… When you see them loot small businesses but never the state and Federal blogs… this is not revolution this is a staged triggered use of a people to destroy their own neighborhoods… Black leaders got to know this….

It’s the Grey ETs motivating the riots.  These people are In a trance.. they don’t know what they are doing.  They are being used.

You need to break the trance motivated by electronic / microwave targeting via 4G and 5G towers. Need to stop the vibration…reverse it to bring people to their senses.

Look at them, they look like they are “swarming”..Informed protests are not the same thing as rioting to destroy. Needless to say both are going on.  Beware of those that are being targeted and no longer thinking but acting out of rage. Anger is a great motivator.  It is how it is used that matters.