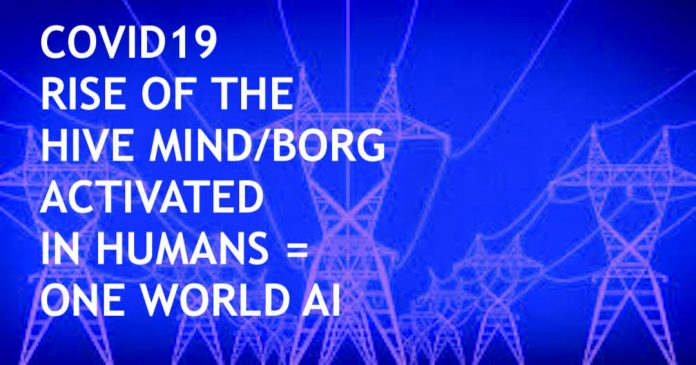 WHAT THE VACCINE WILL CONTAIN:  According to a top-secret source, my idea here is correct.  The Covid19 vaccine and possibly the test will contain NANO GRANULES that are going to be distributed into your body and link you to 5G and the worldwide AI which will be able to track you and your activities as well as send a pulse through a network rendering humans immobile or act in other ways deciding on the whims of the Controllers.  This is the establishment of a worldwide network of Artificial Intelligence.

IDEA : COVID19 IS A REACTION TO THE ACTIVATION OF THE BORG MIND – IN HUMANS – THE GROUP MIND -THE AI – ACTIVATION IN HUMANS… THEY ARE NOT TESTING FOR THE VIRUS THEY ARE TESTING TO SEE HOW SOME HUMANS MAY BE REJECTING THE ACTIVATION… THOSE WHO GET ILL ARE NOT CONTAGIOUS THEY ARE SIMPLY HAVING A PHYSICAL REACTION TO JOINING/ACTIVATION OF THE UNIVERSAL MIND — ELECTRICAL GRID MADE MANIFEST.  The way this was done was through chemtrails worldwide putting into people the fibers, nano to link brains and create one world AI. The flu like symptoms are simply the emotional body reaction to this activation.  And it is projected that old people will self destruct rather than activate.

THE HIDDEN AGENDA FOR THE WORLDWIDE SHUTDOWN-