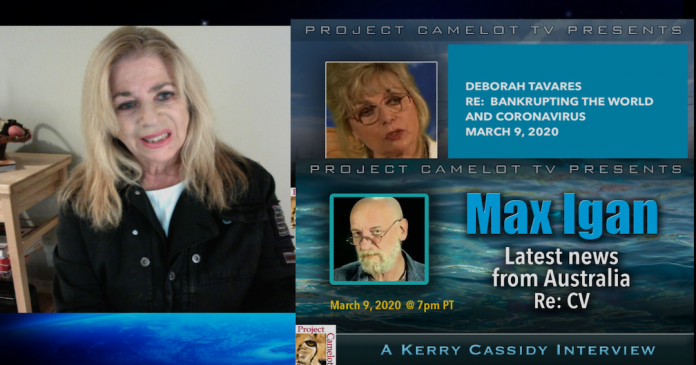 This video is now edited to remove delays…

Max Igan currently resides in a remote valley in Southern Queensland, Australia. Max originally restricted himself to his Crowhouse podcasts preferring the relative anonymity of this particular medium. However, the popularity of Max’s broadcasts led to numerous invitations to speak at various events across the globe. Fortunately, Max agreed and has been sharing his insight and observations with live audiences for the past three years. Max has produced two full-length films, ‘The Awakening‘ (2011) & ‘Trance-Formation‘ (2012), both of which have been widely acclaimed and watched by well over one million viewers worldwide. The AV6 Speakers list would not have been complete without the unique contribution of Max Igan.

Deborah Tavares of StopTheCrime.net and PrimaryWater.org has countless YouTube videos and tirelessly researches documents.  Deborah is known for her direct activism and a leader in speaking the truth and addressing the realities our world faces. Known for her zealous commitment to strict reliance on “the documents” she exemplifies what it means to be a warrior for TRUTH like no other.

She and her husband, Lou, are 3rd generation builders, land developers and have been self-employed in a family operated business for over 30 years.  Much of her work specialized in in-depth research, including Environmental Impact Reports and Department of Real Estate subdivision requirements as well as virtually every aspect of the entire construction build-out to completion. During this process it became evident to her that property ownership and land use rights were continually subject to insidious regulations, increasing constraints and ever greater limitations on land and water use.

Deborah has seen first-hand the effects of how governments-in-name-only continue to perpetuate lies such as the notion that corporate governments represent the people, and that we have scarcity of resources or that Climate Change is based on “real science”. Deborah has been appalled to watch not only her own community, but every corner of the world experience devastation and destruction as communities are decimated by weather weapons such as fires, floods, coastal storm surges artificially created, and atmospheric aerosol spraying, all under the name of “climate change”.  The diabolical use of these silent weapons as warfare systems causes economic bankruptcy, mass migration, death and more.  Deborah discovered that many non-profits, NGO’s, foundations, utilities, banking institutions, all local, state, federal government agencies have conspired against the people.  These corporate agencies posing as governments have adopted policies that are creating worldwide disruption and dismantlement. The United Nations Agenda 21 and 2030, UN Sustainable Development Goals, the World Bank, the IMF, the Federal Reserve, and the International Bankers have hijacked the world’s economies and “we the people” are being exterminated.  Genocide plans are premeditated murder policies that the corporate government constructs are hastily and secretly deploying to extinguish all living creatures and destroy all that is good and decent.

Deborah has also been an outspoken voice to raise awareness about Targeted Individuals (TI’s), and has interviewed many TI’s over the years to help expose these horrific acts of domestic and international terrorism.  Criminal gangs have infiltrated most communities, worldwide, by using gang stalking teams to stalk, track, bully and emotionally devastate their chosen victims.  These criminal gangs use sophisticated weapons to target and harass, do home invasions, character assassinations and traumatize their targeted victims. These directed energy weapons cause severe pain, sleeplessness, isolation, homelessness and even death.  Please watch the YouTube video “My  Experience as a Targeted Individual” by Myron May, who is deceased.  (Watch Part 1 and 3).

Deborah became a vocal and active opponent of SMART METERS and began her work as an activist while attending countless city, county and public utility meetings.  She is currently heard on national and international radio shows as well as all forms of media coverage. She has made numerous YouTube videos, including Who’s Running America, Creation of the Birth Certificate Trust, Ted The Terrible Turner, Coastlines Under Attack, Worldwide Space Based Weapons. Primary Water Explained, Water Wars Stealing Water for Profit and Power, the Cooking of Humanity, Kill Cities by Rothschild and Rockefeller, Accounting Firms “Bankrupting” All Cities, and many more.

Deborah also has a variety of websites, which include many source documents: