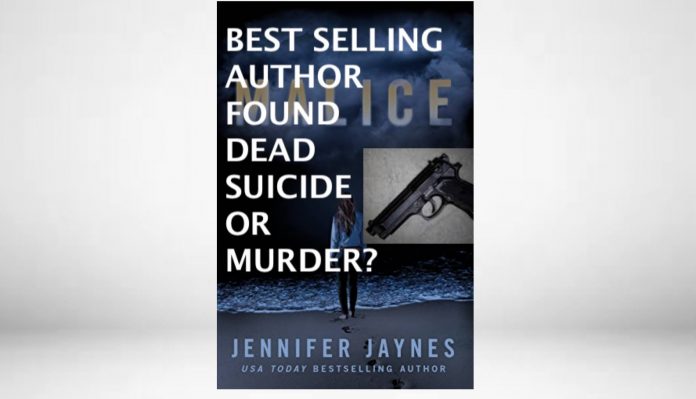 USA Today bestselling author Jennifer Jaynes, who penned thrillers exposing the murderous vaccine deep state, found shot to death..”The death was reportedly ruled a “suicide,” which begs the question of how a person can shoot themselves in the head twice.”—Mike Adams
www.naturalnews.com/2019-11-29-author-jennifer-jaynes-exposing-murderous-vaccine-deep-state-found-shot-to-death.html
She wrote thrillers… her book MALICE which I have just read dealt with vaccines made from immunoceuticals containing aluminum and a Big Pharma plot to make such vaccines mandatory for children.. when they may not be safe…
She appears to have been murdered although for some reason they have classified her death as a “suicide” …with 2 shots to her head… which by the way mirrors the part of the plotline for her best selling novel MALICE.
I am looking into this case.  If children are being force vaccinated to create future super soldiers or reduce the population or guide those who survive in a certain direction what is the likely resultant population going to look like down the road?  Will they be more compliant?  Easily controlled?  Passive?   Can you look ahead and see where this trend is heading?
What is the motivation for big Pharma to kill a best-selling author who raises key issues in the new push for designer immunoceuticals in vaccines?  Her novel outlines how doctors are baited with money to prescribe these vaccines and recommend them as mandatory for school children….
Anyone with any information about the death of Jennifer Jaynes and/or the push to make vaccines mandatory for school children please contact me:  kerry@projectcamelot.tv
RELATED LINKS:
READ BOOKS BY JENNIFER JAYNES
www.amazon.com/s?k=JENNIFER+JAYNES&ref=nb_sb_noss_2

Samoa withdraws vaccine protecting against measles, mumps and rubella after two babies die within minutes of receiving the routine shot – as it’s revealed a nurse ‘injected one of the children without his parents’ consent’