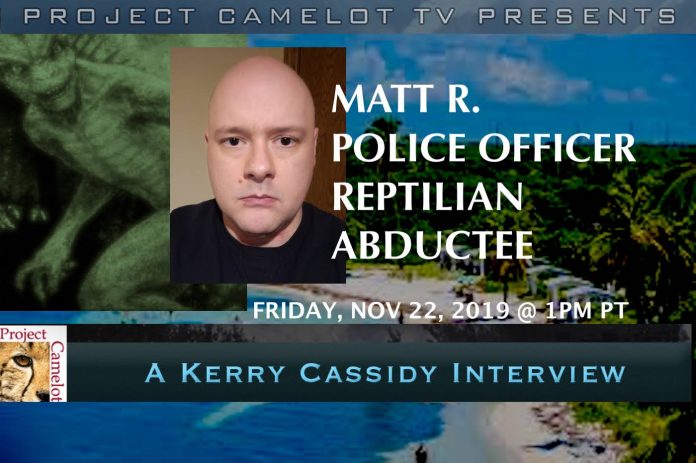 MATT talks about his several abductions by Reptilians, his relationship with Reptilians and their role in crowd control working with our military and police officers going forward.

“Matt R served as an officer on the New Orleans police department during Hurricane Katrina, in the heart of the city. He remained with the department for almost 2 years after the storm. And, he has had several abductions involving reptilian aliens. One of the most interesting of these is the one that took place in 2005, just a few months before Katrina. He was abducted by reptilian aliens, to help them train in anti-riot techniques…”  CONTINUED BELOW….

…”This training was coordinated in concert with a black ops US military group, in a shopping mall, after dark.  He later discovered there are over 15 other cops and military abductees who were taken in these same group training abductions. Matt learned about this fact from Joe Montaldo, who is head of the ICAR group, and a featured guest on “Ancient Aliens” . Joe has testified to the details of this mass abduction, and the other abductees witnessing of his involvement, on several of his “UFO undercover” podcasts, since then.

Matt first started testifying about a government/alien interest in preparing for joint crowd control operations back in Spring of 2010. Since then, we have seen a substantial and unprecedented increase in civil unrest.

He will share details of other abduction experiences he has had, and where he sees these trends headed. Matt will also discuss insights into how this relates to reptilian abductee bloodlines and the history of the Illuminati. In just the past 2 years, he has had two abductions specifically centered on this genetic connection.  This involved weaponization of alien biology, through combining alien DNA and cloned tissues, with stem cell & CRISPR DNA technology.”–Matt R.

These growls I’ve recorded, during a few other shows :