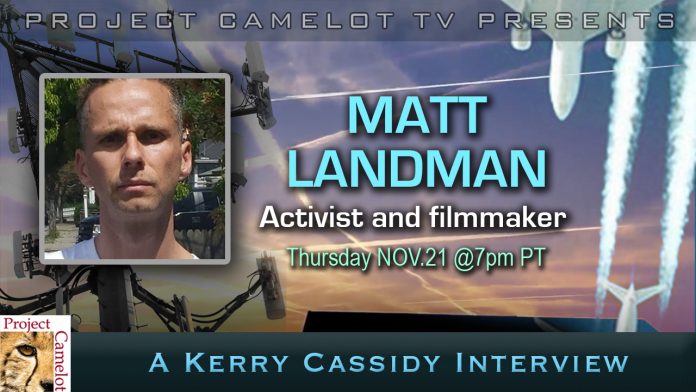 THURSDAY, NOVEMBER 21, 2019 @ 7PM PT – My guest is Matt Landman, activist and filmmaker.  We will be discussing 5G and possible solutions.  See bio below…

Matt Landman is a 38 year old filmmaker activist entrepreneur from Virginia, with a passion for preservation and proliferation of Truth.  His first passion being sounding the alarm on Chemtrails, Matt is most known for his groundbreaking 2017 documentary, FrankenSkies.  After 5 devoted years of impassioned activism, Matt has hosted over a dozen conferences, spoken on hundreds of radio shows and podcasts and now has a new passion : Exposing and mitigating the dangers of 5G and EMF radiation.  With the September 2019 debut of his radiation protection clothing line, Matt strives to bring Hope in a world of increasingly pervasive technology.  While Matt strives to lead by example, his primary mission in life is to empower and inspire others so as to honor the Truth with integrity and help it live on and flourish forever. Find “Matt Landman” on Facebook & Youtube and at ActualActivists.com. Also visit FrankenSkiesTheMovie.com for his film on weather modification history and for the EMF protective clothing line, SperoProtectionClothing.com