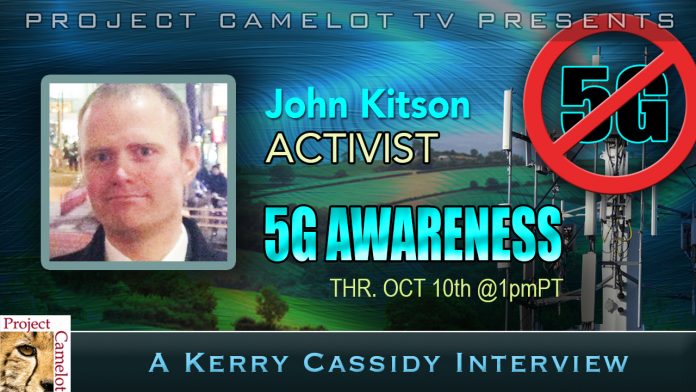 John Kitson is my guest on Thursday October 10th @ 1pm PT.  Now complete and on Youtube.
See his bio below.
WATCH:
youtu.be/MXYuzeNM9C0
“The Daily Mail has featured an article on the local council refusing to have 5G installed in Totnes, Devon, UK.”–John Kitson, 5G Awareness
…”Although the decision has no force in planning law, campaign leader John Kitson claims the action by Totnes town council is a warning to ministers that they cannot bring in 5G without further research into its effects on health.”–Daily Mail article:
www.dailymail.co.uk/news/article-7544239/5G-campaigners-force-Devon-council-pause-installation-new-high-speed-network.html?fbclid=IwAR31rvB0GjRoJhAUXNEahR-Hx7DJbrnrqxts5oL7wBbd4GtWyH35-2nBBC0
Bio:  …”I got involved with 5G after the death of my mother from a brain tumor which I believe was caused by her wireless dect (landline) phone.
I returned to the UK in 2017 and in 2018 started holding events on 5G in the UK and speaking at those events in town halls throughout the UK.
I’ve connected and spoken with others involved in the stop 5G movement such as Mark Steele, Barrie Trower, Ian Crane and I’ve managed to get my council to agree to a moratorium on 5G. This is biggest step so far towards undermining 5G in the United Kingdom so far. I also raise awareness via my website www.5gawareness.com which I have a news page, forum, downloads page (for templates) and events page. I’ll speak anywhere, even outside the UK if requested and I am a full time activist dedicating myself to this cause. I also have a youtube channel “5gawareness” where I share information with the public about how to take a stand against 5G. Although most of my videos have been on 5G. I made a one-off video called “The Truth About Extinction Rebellion” (a movement pushing for zero net co2 emissions connecting them with the 5G rollout which has grossed the highest views on my channel – www.youtube.com/watch?v=536qN22jxak