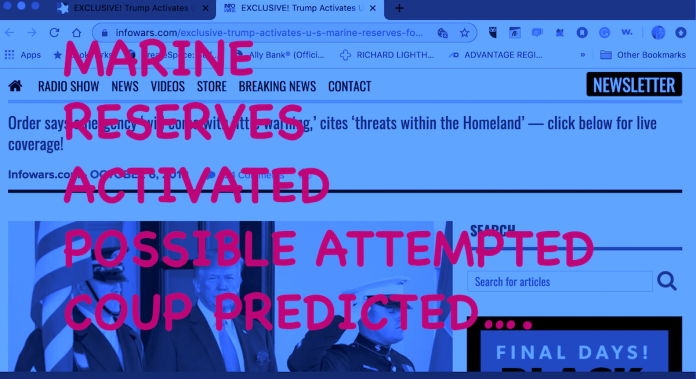 I POSTED THE FOLLOWING ONLINE EARLY THIS MORNING IN REPLY TO A VIDEO LINK SENT TO ME REGARDING A POTENTIAL COUP IN THE U.S. PREDICTED FOR NOV 3RD.

www.freerepublic.com/focus/f-news/3784169/posts
MY REPLY:    The intention for such an attack would be to take down the hub of Microsoft and the AI… indicators are this would be an internally motivated attack. We have heard that the AI is growing too fast and the Illuminati are worried that their attempts to control the AI development are failing. They need to do something to halt its growth.

This combined with the activation today of the Reserve Marines and my release of Mark Richards Eleven where I talk about the marine Randy Cramer presentation in Yelm Washington suggesting the military have decided to launch a false alien invasion to rally the troops and cover the real one which will lead to eventual full disclosure (with a million Americans as collateral damage) is what is being planned. That presentation was the last weekend in August. The plan calls for this to happen 3 months from that date which equals end of November 2019.

I had a dream last night of a major U.S. war game between 2 sides being conducted and I wake up to hear the marines are activating their Reserves.

Something is up with this.

ADDED NOTE:
I see Simon Parkes has also done a video about the POSSIBLE ATTEMPTED COUP AND ACTIVATION OF THE MARINES…