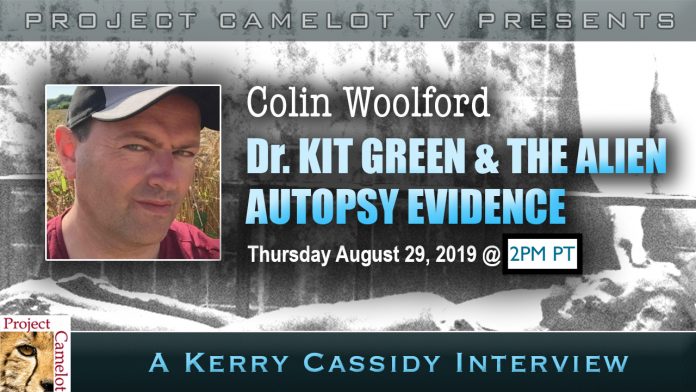 We discuss the latest news regarding the Alien Autopsy controversy including the latest Rich Dolan article referencing an interview with Dr. Kit Green (CIA and former Air Force the broadcast with Spyros Melaris and Philip Mantle.  BROADCAST ON AUGUST 29, 2019.

…”After leaving the CIA in the mid-1980s, Dr. Green became an independent consultant and has served on the Defense Intelligence Agency TIGER (technology warning) Committee, according to the National Academies of Science website, where you can read Dr. Green’s biography:

Christopher C. Green, Chair, is the assistant dean for Asia Pacific of the Wayne State School of Medicine (SOM) in Beijing, China. He is also a clinical fellow in neuroimaging/MRI in the Department of Diagnostic Radiology and the Department of Psychiatry and Behavioral Neurosciences of the SOM and the Detroit Medical Center (DMC). His medical specialties are brain imaging, forensic medicine and toxicology, and neurophysiology, and his personal medical practice is in the differential diagnoses of neurodegenerative disease. He has served and continues to serve on many government advisory groups and private sector corporate boards of directors. Immediately prior to his current position, he was executive director for emergent technology research for the SOM/DMC. From 1985 through 2004 he was executive director, Global Technology Policy, and chief technology officer for General Motors’ Asia-Pacific Operations. His career at General Motors included positions as head, Biomedical Sciences Research, and executive director, General Motors Research Laboratory for Materials and Environmental Sciences. His distinguished career with the CIA extended from 1969 to 1985 as a senior division analyst and assistant national intelligence officer for science and technology. His Ph.D. is from the University of Colorado Medical School in neurophysiology, and his M.D. is from the Autonomous City University in El Paso, Texas/Monterey, Mexico, with honors. He also holds the National Intelligence Medal and is a fellow in the American Academy of Forensic Sciences. Dr. Green is a current member of the National Research Council’s Standing Committee on Technology Insight—Gauge, Evaluate, and Review (TIGER).

Green, who has maintained an interest in phenomenology and is a close associate of Dr. Hal Puthoff, the SRI scientist who worked on psychic ‘remote viewing’ for the CIA, was dragged into the ‘Spies, Lies, and Polygraph Tape’ UFO spy games affair by Dr. Ron Pandolfi’s release of a series of private email messages in September 2006.”–