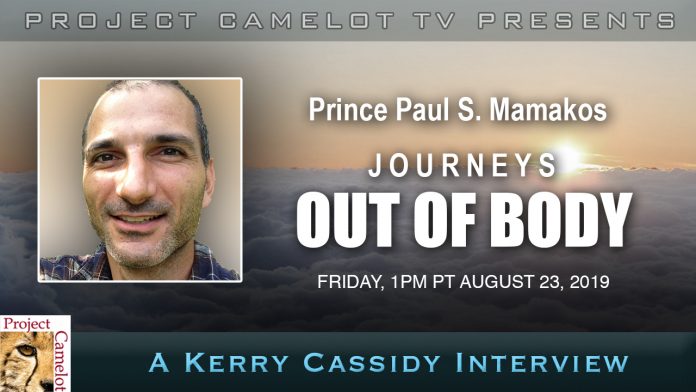 FRIDAY, August 23, 2019 my guest was Paul Mamakos, author of OUT OF BODY, an out of body journal.

Prince Paul S. Mamakos  (Note:  Paul is not a real prince but simply added that title to his own name).

Paul has been an out of body traveler for over 20 years. He had his first sleep paralysis experience in 1996 and experienced several out of body experiences later that year.

What’s unusual about Paul is that he experienced oneness when he was 25 years old. Including the extreme version of oneness, the one (loss of the ‘I’).

From 2000 to 2001 at the age of 25, he went through several oneness experiences and expanded out to the universe and became one. Prior to that event, he searched for many years through science, spirituality, yoga and many religious philosophies. After oneness, it took him many years to process the understanding.

In the early part of his life, he traveled the world visiting over 50 countries.

Now, rather than spiritual enlightenment, his goal is physical enlightenment: similar to Maslow’s Hierarchy of Needs, by improving every day and serving people.

Some of his other hobbies are relaxing, eating raw organic foods, fasting, liquidationism, and gardening.

He’s an author of two books “The Golden One: an out of body book” and the “Out of Body Journal.”

Paul’s education includes:
• One year of General Studies at CW Post Campus 1993-1994
• Two years studying nuclear engineering at Purdue University; Two and a half years studying Aviation Flight Technology at Purdue where he earned a commercial instrument pilot license and an Associate of Science degree in Aviation Flight Technology, 1994-1998
• He studied 6 months of Traditional Chinese Acupuncture at NY College of Health Professions, 1998-1999
• US Army 82nd Airborne Infantry Paratrooper, 1999-2000
• He became a Hatha Yoga teacher in 2001 at the Integral Yoga Institute at Yogaville
• 1-year studying social science at the University of Virginia, 2006, no degree
• a Bachelor of Science degree in Holistic Wellness at the University of Integrated Science California, 2013
• a Surgical Technology Certificate at Piedmont Virginia Community College, Summa Cum Laude, 2014-2016
• And he’s taken 10 programs at the Monroe Institute including the Gateway Outreach Trainer Program.